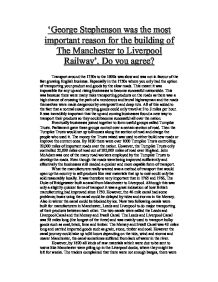 'George Stephenson was the most important reason for the building of The Manchester to Liverpool Railway'. Do you agree?

'George Stephenson was the most important reason for the building of The Manchester to Liverpool Railway'. Do you agree? Transport around the 1750s to the 1800s was slow and was not in favour of the fast growing English business. Especially in the 1750s where you only had the option of transporting your product and goods by the slow roads. This meant it was impossible for any up and rising businesses to become successful nationwide. This was because there were many risks transporting products on the roads as there was a high chance of crossing the path of a murderous and brutal highwayman and the roads themselves were made dangerous by overgrowth and deep ruts. All of this added to the fact that a normal coach carrying goods could only travel at 2 to 3 miles per hour. It was incredibly important that the up and coming businesses found a new way to transport their products so they could become successful all over the nation. Eventually businesses joined together to form useful groups called Turnpike Trusts. Parliament gave these groups control over a certain section of road. Then the Turnpike Trusts would set up tollhouses along the section of road and charge the people who used it. The money the Trusts raised was used to either build new roads or improve the current ones. By 1830 there were over 1000 Turnpike Trusts controlling 22,000 miles of important roads over the nation. However, the Turnpike Trusts only controlled 22,000 miles of road out of 105,000 miles of road over England. John McAdam was one of the many road workers employed by the Turnpike Trusts to develop the roads. ...read more.

After the committee thought that they had gained enough public support against the opposition they completed their survey of the cost and the route and handed it in to the Parliament to get permission. So in 1825 the Provisional Committee of Liverpool and Manchester handed in the survey along with some petitions in support of the railway from merchants, manufacturers and traders. In the year 1825 Parliament began to debate the plan for the railway. Public support for and against the railway might have been equal, however in Parliament the opposition had three leading figures going all out against the railway. The three people in Parliament were Earls Sefton and Derby and the Duke of Bridgewater, these men were very powerful leaders looked up to in Parliament. It came as no surprise when Parliament rejected the railway because of lack of support in Parliament and because there were many doubts over the safety and performance of the locomotive. The main reason they rejected the railway was because people did not trust the steam locomotive and preferred the thought of horses pulling the trains. Then came a huge changing point in 1826 the Committee made a second attempt for the railway and changed the route of it to try and make sure there were not as many people opposing the railway in Parliament. Other changes from the first plan were they would build tunnels so the track did not run through any streets. The track stopped at Salford rather than travelling to the centre of Manchester. The biggest change that turned the advantage towards the Committee was not anything to do with the plan. This was because the main reason for their plan being rejected was because of the lack of support in the House of Lords, so the Committee offered Canal owners the chance to buy some shares in the railway. ...read more.

I think this was the most important reason for the building of the railway between Manchester and Liverpool because without the strong support in Parliament the committee were always going to have their plan rejected. The last reason for the building of The Manchester to Liverpool was because the companies' decision to change their plan after it was rejected in 1825. The committee changed the plan so that the route of the railway did not cause so much public inconvenience and also so that the track did not run through so many of the rich people's territory. Also the committee offered shares to any canal owners. This was also very important because the committee could have just given up after their first defeat in Parliament, or tried again in Parliament but have failed because of the people who were the committee's biggest enemies and not on their side. I believe the most important reason for the building of the Manchester to Liverpool was the main opposition of The Duke of Bridgewater and the Earls Sefton and Derby turning to support in favour of the railway. If the three men had stayed against the company the committee would have never been given permission in Parliament because they did not have enough support there. The committee might have had a lot of support from the general public, merchants and factory owners but in Parliament they had no powerful figure fighting for the railway. I think therefore if the committee had not changed their plans and offered the canal owners shares they would have never been given permission in the House of Lords. The move to offer shares to the three men was a very cunning move because they knew the men were always in search of more money and the railway was destined to be a huge success and make a lot of money for everyone. ...read more.