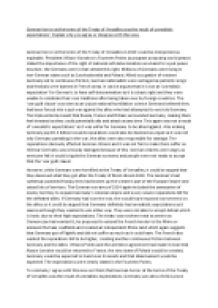 German horror at the terms of the Treaty of Versailles was the result of unrealistic expectations. Explain why you agree or disagree with this view.

﻿German horror at the terms of the Treaty of Versailles was the result of unrealistic expectations?. Explain why you agree or disagree with this view. German horror at the terms of the Treaty of Versailles in 1919 could be interpreted as equitable. President Wilson Woodrow?s Fourteen Points (a program proposing world peace) stated the importance of the right of national self-determination as a basis for a just peace however, the Germans were in fact denied this right. Millions of Germans were living in non-German states such as Czechoslovakia and Poland. Allied occupation of western Germany led to continuous friction, German nationalists were outraged as patriotic songs and festivals were banned in French areas. It can be argued that it is not an ?unrealistic expectation? for German?s to have self-determination as it is a basic right and they were unable to celebrate their own traditions after being taken over by foreign countries. ...read more.

The reparations obviously effected German citizens and it was not fair to make them suffer as Weimar Germany was seriously damaged because of this. German citizens were angry as everyone felt it would cripple the German economy and people were not ready to accept that the ?war guilt clause?. However, while Germans were horrified at the Treaty of Versailles, it could be argued that they deserved what they got after the Treaty of Brest-Litovsk 1918. The German?s had ruthlessly punished Russia, they had broken up the western part of the Russian Empire and seized lots of territory. The German war aims of 1914 again included the annexation of enemy territory to expand Germany?s colonial empire and a very severe reparations bill for the defeated allies. ...read more.

The expectations were clearly stated in the Fourteen Points. To conclude, I agree with this view as I think that German horror at the terms of the Treaty of Versailles was the result of unrealistic expectations. Germany war aims of 1914 prove that they wanted to annihilate other countries and take over their territory and cripple the defeated allies yet the terms caused an uproar in Germany mainly due to the high reparations cost. £6.6 billion was a lot of money for Germany to pay and it was unfair on German citizens as they had to suffer however, the Germans were ruthless to Russia in the Treaty of Brest-Litovsk in 1918 so it could be argued that Germany actually deserved what they got. The complaining of the severity of the Treaty of Versailles essentially reminded Germany of the harshness of Brest-Litovsk ...read more.