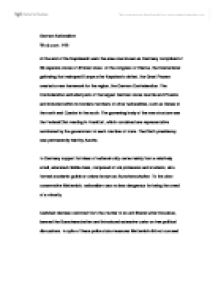 German Nationalism Word count: 1400 At the end of the Napoleonic wars the area now known as Germany comprised of 39 separate states of different sizes. At the congress of Vienna, the international gathering that reshaped Europe after Napoleon's defeat, the Great Powers created a new framework for the region, the German Confederation. The Confederation excluded parts of the largest German states Austria and Prussia and included within its borders members of other nationalities, such as Danes in the north and Czechs in the south. The governing body of the new structure was the Federal Diet meeting in Frankfurt, which contained one representative nominated by the government of each member of state. The Diet's presidency was permanently held by Austria. In Germany support for ideas of national unity came mainly from a relatively small, educated middle class, composed of uni professors and students, who formed academic guilds or unions known as Burschenschaften. To the ultra-conservative Metternich, nationalism was no less dangerous for being the creed of a minority. Carlsbad decrees stemmed from the murder of an anti liberal writer Kotzebue, banned the Burschenschaften and introduced extensive curbs on free political discussions. In spite of these police state measures Metternich did not succeed in holding back the tide of change and the Burschenschaften simply went underground. ...read more.

Bismarck feared the Catholic Church, with its links to Polish nationalism as a threat to German unity. The Prussian king was also the German Kaiser or emperor. He controlled the armed forces and determined crucial issues of war and peace without reference to the elected representative of the people. Germany's new ruler took national unity as an established fact and aimed unreservedly to expand his country's power. He had Bismarck's intolerance of minority groups with the more aggressive, Social Darwinian spirit of German nationalism. From 1897, Wilhelm's Germany pursued a strategy known as Weltpolitik (world policy), in an attempt to acquire an overseas empire alongside its British and French rivals. Under the guidance of Admiral Tirpitz (secretary of state for the Navy 1897-1916), the building of a large battle fleet became an integral part of this approach. Nationalism was therefore important as ideological 'cement' holding together a progovernment coalition of forces. Nationalism in the Wilhelmine period was a substitute for the imperial system's failure to integrate the competing political parties. The national unity induced by the outbreak of war in 1914 - the so-called 'spirit of August' proved impermanent. The nature of Germany's war aims became a source of conflict within the political system. The army supreme command wanted extensive territorial gains for Germany at the end of the war, while a majority in the Reichstag voted in July 1917 for a compromise peace without forced annexations. ...read more.

Clearly, there was a close relationship between Prussia's economic modernisation and its role in German unification. Bismarck possessed the political will to use these resources coupled with the diplomatic skill to exploit the new balance of forces in Europe. When the Reichstag refused to grant more taxes to pay for the 1862 Army Bill reforms, Bismarck simply ignored it collecting taxes illegally to 4 years. Bismarck had no intentions of maintaining cooperation with Austria. From 1862-1871 Bismarck achieved what is usually described as German unification, though he himself aimed only to expand Prussia's frontiers and ensure it's security. He despised nationalists, though he was to harness the idea to his own ends. Bismarck was indeed a Junker and a Prussian. Bismarck had taken care to appear to act legally against Denmark. He claimed that Austria and Prussia were merely upholding the 1852 Treaty of London which had settled the duchies' future. In 1866 he again claimed to be acting legally as the injured party when he claimed the Austrians had breach their treaty obligations over the duchies and launched the Austro-Prussian war. The Prussian advance was so quick that Bismarck had difficulty in preventing the now enthusiastic king and his generals from ordering a march on Vienna. Austria had to accept defeat under the Treaty of Prague. ...read more.