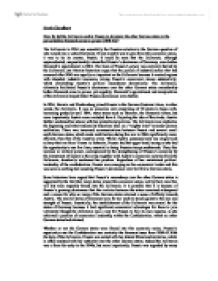 Rimah Choudhury How far did the Zollverein enable Prussia to dominate the other German states in the period before Bismarck came to power (1858-62)? The Zollverein in 1834 was essentially the Prussian solution to the German question of who would rule a united Germany. If any country was to gain from this economic union, it was to be its creator, Prussia. It could be seen that the Zollverein, although unprecedented, unquestionably intensified Prussia's dominance of Germany, even before Bismarck's appointment in 1862. The basis of Prussia's power was certainly fuelled by the Zollverein, yet Marxist historians argue that the period of industrialisation that had occurred after 1850 was equally as important as the Zollverein because it created regions with abundant industrial resources, raising Prussia's economical stance substantially, whilst diminishing Austria's political ascendancy dramatically. The Zollverein, ultimately facilitated Prussia's dominance over the other German states considerably before Bismarck came to power, yet arguably, Bismarck's appointment and manipulation of the Zollverein helped foster Prussian dominance even further. In 1834, Bavaria and Wurttemberg joined Prussia in the German Customs Union, in other words, the Zollverein. ...read more.

Some historians have argued that Prussia's ascendancy over the other German states is supported by the fact that many states joined this economic union, not by their own free will but were arguably forced into the Zollverein. It is possible that it is because of Prussia's growing dominance that the rivalries between the states remained widespread and a reason for why so many of the German states retained a sense of affinity towards Austria. The smaller states of Germany were far too weak to stand against to the size and strength of Prussia. Essentially, the establishment of the Zollverein was crucial for the states of Germany because it had significant economical advantages for them to join. Ultimately though the Zollverein was a way for Prussia to flex its own muscles, as she achieved a position of economical leadership within the Confederation, which no other German states had attained. Whether or not the German states were forced into this economic union, Prussia's superiority over the Confederation was certainly the foremost issue from 1858-62.With the help of the Zollverein, Prussia was united with her distant Rhineland territories, which in effect assisted with her authority over the other German states. ...read more.

Many revisionist historians, however have argued that unification would have occurred without Bismarck, thus questioning how far Bismarck was able to encourage Prussian control over the German states in 1862. The Zollverein predominantly facilitated Prussia's superiority during the period 1849 to 1862, where it could be seen that the balance of power was reversed between Prussia and Austria. The Zollverein demonstrated to the states that they could work collectively for the common good, and this was supported by the fact that the states were allowed to make their own trade agreements. But it could be argued that it was only Prussia who was able to govern the agreements made, because she was in possession of superior economic resources that ultimately allowed her to preserve her supremacy over the other German states. It can be argued therefore that even though the Zollverein was merely an economic union, it was still a fundamental basis for Prussia to advance her own leadership over the other German states. It had the outcome of escalating Prussia's dominance in Germany whilst destabilizing Austria's political authority. The Zollverein ultimately increased communications and relations between the states but it was Prussia who eventually triumphed over the smaller states of Germany. ...read more.