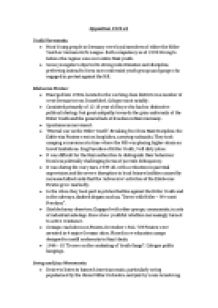 ﻿Opposition 1939-45 Youth Movements: 1. Most Young people in Germany were loyal members of either the Hitler Youth or German Girl?s League- Both compulsory as of 1939.Wrong to believe the regime won over entire Nazi youth. 2. Some youngsters objected to strong indoctrination and discipline, preferring instead to form non-conformist youth groups and gangs who engaged in protest against the N.R. Edelweiss Pirates: 1. Emerged late 1930s, located in the working class districts in a number of west German towns: Dusseldorf, Cologne most notably. 2. Consisted primarily of 12-18 year old boys who had no distinctive political ideology but great antipathy towards the grim uniformity of the Hitler Youth and the general lack of freedom in Nazi Germany. 3. Spontaneous movement. 4. ?Eternal war on the Hitler Youth?. Breaking free from Nazi Discipline, the Edelweiss Pirates went on long hikes, carrying rucksacks. ...read more.

10. 1944 ? SS ?Decree on the combating of Youth Gangs?. Cologne public hangings. Swing and Jazz Movements: 1. Desire to listen to banned American music, particularly swing popularised by the Glenn Millar Orchestra, and jazz by Louis Armstrong. Himmler highly opposed to these movements. 2. Illegal dances attended by up to 6,000 youths. Created illegal clubs at which ?hot-jazz? was played. The Harlem Club 3. Nazi imposed ban on public dances 1940. 4. No burning desire to offer political resistance to N.R, but rather by youth exuberance to have a good time. ?We are not against the Nazis, they are against us.? 5. Interpreted as a lack of patriotism. Sought a culturally permissive society. Communist Movement: 1. By the late 1930s, the underground communist movement had been severely weakened by the actions of the Gestapo. The exiled leaders of the KPD decided to rethink its strategy. ...read more.

Anti-Soviet exhibition burn down. White Rose Group: 1. Went beyond mere dissent. 2. Led by brother and sister Hans and Sophie Scholl. 3. Series of leaflets printed 1942-43 and distributed initially among the students of Munich University but in time to many towns of central Germany. 4. Content was highly political and openly condemned the moral and spiritual values of the Nazi regime. 5. One of the early leaflets entitled, ?Isn?t every decent German today ashamed of the Government?? Brave gesture of defiance and self-sacrifice. Low security = infiltrated by Gestapo. Churches: 1. Refrained from widespread resistance to the regime. 2. Instead, opposition rested on the actions of individuals: 1. Bishop Galen of Munster: Outspoken sermon attacked euthanasia policy in 1941. 2. Deitrich Bonheoffer: Opposition started as religious dissent but, from 1940, developed into political resistance, which brought him into direct contact with elements of the conservative elite. 3. Niemoller: Founder of Confessional Church. Limits of opposition: Army, tied with oath of loyalty to fuhrer? Churches, Concordat Communism, Nazi-Soviet Pact 1941 Youth ...read more.