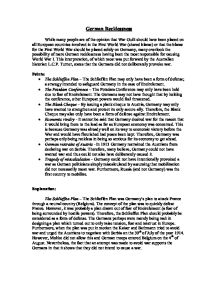 German Recklessness While many people are of the opinion that War Guilt should have been placed on all European countries involved in the First World War (shared blame) or that the blame for the First World War should be placed solely on Germany, many overlook the possibility of mere German recklessness having been the most responsible for causing World War I. This interpretation, of which most was put forward by the Australian historian L.C.F. Turner, states that the Germans did not deliberately provoke war. Points: * The Schlieffen Plan - The Schlieffen Plan may only have been a form of defense; a strategy intended to safeguard Germany in the case of Encirclement. * The Potsdam Conference - The Potsdam Conference may only have been held due to fear of Encirclement. The Germans may not have thought that by holding the conference, other European powers would feel threatened. * The Blank Cheque - By issuing a plank cheque to Austria, Germany may only have wanted to strengthen and protect its only secure ally. Therefore, the Blank Cheque may also only have been a form of defense against Encirclement. ...read more.

The Germans perhaps were merely being rash in designing a plan which turned out to only raise tension, fear and mistrust in Europe. Furthermore, when the plan was put in motion the Kaiser and Bethmann tried to avoid war and urged the Austrians to negotiate with Serbia on the 30th of July of the year 1914. However, Moltke did not allow this and German troops entered Belgium on the 4th of August. Nevertheless, the fact that an attempt was made to avoid war supports the Germans in that it shows that they did not intend to cause a war. The Potsdam Conference - The Potsdam Conference was a meeting with the Kaiser and his staff to discuss the possibility of the breakout of a war and thus the European situation. The conclusion made at this conference was that a European war was inevitable due to trouble in the Balkans and increasing tension throughout Europe. Many agreed that, for Germany, it would be an advantage for the war to occur sooner rather than later. However, the Kaiser and his staff probably did not take into account that the other European powers would feel threatened by the conference which had been held and its outcome. ...read more.

Therefore, it cannot be said that Germany desired war for the reason that it would bring them to the lead as far as European economy was concerned. Perhaps Germany should not have been so anxious for economic mastery of the world as this made other powers feel threatened and thus increased tension and mistrust, especially throughout Europe. German restraint of Austria - In 1913 Germany restrained Austria from declaring war on Serbia. This is an extremely good argument in favour of Germany as it shows that Germany could not have deliberately wanted war as Germany would otherwise have allowed Austria to begin a war with Serbia - this would have been the perfect excuse for starting a war in Europe. Tragedy of miscalculation - This is the theory that was put forward by Australian historian L.C.F. Turner which states that Germany could not have intentionally provoked a war as the fault should be placed on German politicians who simply miscalculated by assuming that mobilization did not necessarily mean war. Furthermore, Russia (and not Germany) was the first country to mobilize. Also, German generals (especially Montke) miscalculated by sticking rigidly to their plans (in this case the Shlieffen Plan) in the belief that this would bring Germany a quick and decisive victory. ...read more.