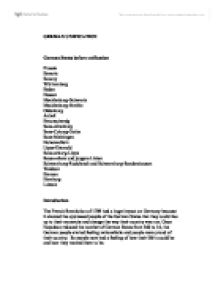 GERMAN UNIFICATION German States before unification Prussia Bavaria Saxony W�rttemberg Baden Hessen Mecklenburg-Schwerin Mecklenburg-Strelitz Oldenburg Anhalt Braunschweig Saxe-Altenburg Saxe-Coburg-Gotha Saxe-Meiningen Hohenzollern Lippe-Detmold Schaumburg-Lippe Reuss-altere und jungere Linien Schwarzburg-Rudolstadt and Schwarzburg-Sondershausen Waldeck Bremen Hamburg Lubeck Introduction The French Revolution of 1789 had a huge impact on Germany because it showed the oppressed people of the German States that they could rise up to their monarchs and change the way their country was run. Once Napoleon reduced the number of German States from 360 to 16, the German people started feeling nationalistic and people were proud of their country. So people now had a feeling of how their life's could be and how they wanted them to be. Soon after Napoleons downfall the Ancien Regimes were put back and German unification was put on hold. During this time the Romantic Movement happened. It saw a revival in German thought and culture and it encouraged people not to be afraid of change. It also increased the knowledge of a victorious past with medieval tales of chivalry through music and literature. During the 1830s and 1840s many developments occurred in Germany. Roads, railways and newspapers were improved. Since the literacy rate was rising, people could communicate easier and news of nationalism spread. ...read more.

would gain unification, not speeches and declaration like during the 1848 Revolution. He wanted an active foreign policy and emphasized that Prussia had to keep her power together at all times since the people of Germany didn't look at Prussia's liberalism but at her power. How Bismarck achieved Unification Bismarck knew that if he wanted to achieve his goal of a unified Germany he had to get the people on his side and stop other countries from forming coalitions against Prussia. He knew that the only way to unify the German States was through war but he also knew that it wouldn't look good if Prussia declared war on the other countries since they would think that Prussia wanted to get too powerful. He knew that Europe wouldn't allow this to happen since they had just dealt with Napoleon. So he had provoke the other countries to attack him. His first step was to gain the two states of Schleswig and Holstein since they both had a majority of German speaking citizens and wanted to join the German empire. He got his opportunity when in 1863 Denmark tried to take away the autocracy of these two states. Bismarck declared that to the German Confederation that that was unacceptable and declared war on Denmark with Austria. ...read more.

They thought that the only way to survive this attack was to join forces with Prussia. Prussia once again won the war and thanks to the fair terms in the Treaty of Prague, Austria had stayed out of the war. Prussia received Alsace and Lorraine and France had to pay high reparations. After the war, Bismarck won over most of the princes who agreed to a unified Germany under the Prussian king, although most were allowed to keep some power over their state. On 18th January 1871, in Versailles, the King was proclaimed Kaiser William I. It seems like Otto von Bismarck did plan ahead most of the events he wanted to do, but most of them also had to do with luck. There was no way of ensuring that all of his plans were going to run smoothly. To his luck, nothing really went wrong but if it had, there could have been major catastrophes. Then again, Bismarck had planned everything brilliantly and to the last detail. He was quick and left no time for intervention and he seemed to always be one step ahead of his rivals and most of all, he always appeared to be the innocent party. I think most of all, Otto von Bismarck knew how to take advantage of certain situations and he did, to his benefit. He was also a very enthusiastic man who wanted nothing more then the unification of Germany. ...read more.