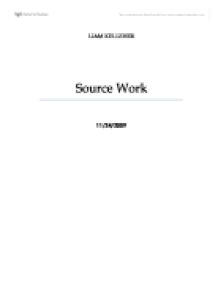 Sources A and B differ in their accounts of the German revolutionary period 1918-19, as they are both from different political perspectives. Source A is from Rosa Luxemburg who, along with Karl Liebknecht led the extreme left wing, Spartacus league. The Spartacists had been formed in 1905 as a splint of the SPD party and by 1918 it had a national membership of around 5000 (Layton 2005). On the 1st January 1919 the Spartacists formally founded the KPD party – German Communist Party. They believed that Germany should follow the same route as Communist Russia. The main aim of the Spartacists was to create a soviet republic through workers’ and soldiers’ councils. This supported power to the poor people, refusing to take part in parliamentary elections, preferring instead to place its faith in the workers’ councils (Layton 2005). Historian Lee (1998:9), affirms this by stating that,

“The Spartacists wanted close association between Germany and Soviet Russia, together with a transfer of all political powers to the workers’ and soldiers’ councils...”

Although Luxemburg had plans to ‘undermine Ebert’s government’ with a great revolution, Lee (1998) states, the Spartacists didn’t have a great deal of control over the workers’ and soldiers’ councils. Source A shows us that Luxemburg was not ready for the ‘November revolution’ as it “had many difficult tasks to perform.” Luxemburg feels that the revolution is just the beginning as Ebert is only a moderate, therefore he will co-operate with the elite. To the Communists this was a betrayal of the socialist movement and a revolution had not actually taken place. Luxemburg’s leaflet was trying to goad the worker’s to carry on the revolution.

Source B however, is from the army general, General Groener (Hindenburg’s successor). General Groener is politically right wing and, opposite to Luxemburg is in the interest of the elite. Along with Ebert (who on the 9th November 1918 created a provisional coalition), they were becoming increasingly worried that the extreme left would gain the upper hand. Ebert was a moderate and was frightened of the political situation. Ebert recognised the growing number of workers’ councils and feared they might jeopardize his policy of gradual change (Layton 2005). On November 10th the day after the declaration of the Republic, as Source B suggests General Groener telephoned Chancellor Ebert. Their discussion was very important. General Groener informed Ebert that the “army put itself at the disposal of the government.” Groener used this as an opportunity to share his views and compromise that Ebert would leave the structure of the army alone and trounce the revolutionaries. Lee (1998:9) states,

“The SPD leadership were prepared to take a pragmatic course by making a deal with   Groener and the Freikorps.”

This affirms that the government were acting to prevent a revolution in December 1918 and January 1919. Lee argues that the SPD exaggerated the danger, therefore swung too readily into a counter-revolutionary position (Lee 1998). General Groener was cooperating with Ebert to save the position of the military elite and stop a Communist revolt. Groener did not fully support Ebert but was prepared to negotiate with him as he was a moderate socialist.

As we can see from sources A and B the different political perspectives had a great impact on the New Republic. Source A shows the political threat to Weimar republic and government from the left wing (KPD) Spartacist uprisings, who continued with revolutionary disturbances. The left wing was divided between the moderate socialists and the Communists. Therefore the wide range of political beliefs undermined one Republic (Lee 1998). There were many strengths and weaknesses in the constitution of the New Republic, some of the strengths of the constitution were that it formed a coalition where laws could be passed. It also became more democratic, where all peoples had a say which meant the voting system was fair. However, the coalition was very weak; every time they wanted a law passed other parties could vote against it. No single party received more seats than the others, and the introduction of proportional representation allowed small extremist splinter parties to get into government, like the Communists and the Nazis (Layton 2005).

Source B, however, shows the uprising from the political right and the interests of the elite. The New Republic gained further political division when the Treaty of Versailles was signed. Germany was expecting the treaty would follow the liberal American president, Woodrow Wilson’s 14 points. Yet it was different. The Treaty of Versailles had an important impact on the Weimar Republic (Lee 1998). Lee (1998:27) states,

“The Treaty of Versailles created a deep and widespread resentment throughout the entire population.”

Germany was forced to take the blame and pay for the war which they started and lost. This was a huge embarrassment. The right-wing was embarrassed and livid; first ‘they stab the army in the back’ and now they ruin Germany’s reputation as a nation. The ‘stab in the back myth,’ “acted as a powerful stick with which to beat the new leaders of the Republic” (Layton, 2002:114). The left wing were also furious, like the right wing they were also passionate for their country, but more so as a lot of worker's were affected by the loss of the Iron and Coal mines and other industry due to Germany’s territory losses (White 1997).

The right-wing continued to cause an uprising to try and overthrow the government, these included people like Wolfgang Kapp. The Kapp Putsch created instability for the New Republic, March 1920 Kapp lead 5000 troops and took over government buildings. Ebert and his government to fled for safety. This allowed Kapp to declare himself Chancellor. With Ebert succeeding to hold a general strike and Kapp losing power; the left wing took advantage (Layton 2002). Communists tried to take over the Ruhr, however, this time the army followed Ebert’s command and overpowered the uprising, this shows the army were for the political right. In 1923 Hitler led a similar uprising to Kapp; the Munich Putsch. Historian Layton (2005:106) adds,

“The inglorious result of the Nazi Putsch was encouraging for Weimar democracy.”

Hitler stormed in to a beer hall and forced Kahr, Lossow and Seisser to promise to support him. Hitler thought Kahr would join forces but Kahr denied. This later caused a conflict in the streets between Nazis and the police (Layton 2005). Hitler’s speech at his trial however, gained him national recognition. The Judges were right wing and were lenient on him. Therefore, the Kapp and Munich Putsch created instability for the Weimar republic (Lee 1998).

Source C and D differ in their interpretation because they are written at different times. Historical perspectives change over time as historians gain access to local archives and official documents. Archives and official documents become more available as time goes by because people and governments become less attached and become less biased with time McDonough (2003:6) affirms this,

“In the 1970’s, many German historians used German archives extensively for the first time.”

When a historian is born is also a major factor, if a historian was born and lived through the historical event it becomes very personal to them causing them to be more biased, this is true with Bullock who more than likely lived through the hyperinflation crisis. Yet, if the historian was born post to the event and didn’t experience it, the historian is detached; they are less biased writing more freely and openly. Source C reveals the impact of the hyperinflation crisis wasn’t based on social class, “savings of the middle classes and working classes were wiped out.”  But historians Hite and Hinton (2000) argue “such assumptions have come to be questioned in light of recent research,” this shows that as time goes by historians perspectives change.

Source D (written 36 years later than source C) has a different viewpoint and disagrees. Source D has an advantage due to hindsight. Because of research, it has been found that there were very different groups which were affected in different ways (Lee 1998). The hyperinflation crisis impact wasn’t based on class, rather if you had savings; you lost out “those with savings and, especially those who bought war bonds, found their money had been invested” (Layton 2002:109). But if you were in debt, you benefitted. As Layton (2002:109) continues, “At the other extreme, the real winners were those...who were able to pay off their debts with inflated and worthless money.” Historians shouldn’t make general assumptions as different people are affected in different ways. Some business men were able to take advantage of the crisis and bought up properties from the desperate and gullible; like Hugo Stinnes who, by the end of 1923 controlled twenty percent of German industry (Layton 2002).

Layton (2005) compares, that on the surface, Germany wasn’t doing so bad. The Weimar republic was able to continue economic growth and increase production better than other European countries; Britain had an unemployment rate of 17% in 1921, whereas Germany had nearly full employment with only 1.8% unemployed and rising wage levels. The implication of changing historical perspectives is that the truth can become distorted, people can exaggerate or fabricate their own perspectives and what’s more, events can be forgotten. It wasn’t just emotional but also political perspectives that historians differed with. Historians often impose on their interpretation of events because they write from different principles and political perspectives.

Source E and F differ in their perspectives because source E is from a historian who was American and source F is from a historian who was German. Source E is a biased perspective who blames Germany for the rise of National Socialism; many English and American historians had this view. Source E suggests that Hitler was affected by Germany’s past, Shirer points out that Hitler’s views reflected German history. The Nazis wanted to be great and powerful, they believed the Treaty of Versailles stood in the way and furthermore, wanted to restore Germany’s greatness to the way it was before the war. Source E asserts that Nazism was anti-democratic and wanted an authoritarian government. MacDonough (2003:54) asserts,

“National Socialism was a consequence of these German preoccupations”

Up until World War 1, there had always been a central figure of power (the Kaiser) and the Elite had run the government because they were authoritarian and had all the power. The core of National Socialism was what Germany used to be before World War 1 (Layton 2005). McDonough (2003:41) highlights,

“He [Hitler] had the ability to inspire an audience to share his bitterness, his fears...and positive programme to rescue Germany.”

Nazism built its support by tapping into the negative feelings of certain sections of German society, towards problems such as the ‘harsh’ terms of the Versailles treaty, high inflation, the instability of democratic government, the economic position of the Jews in German society and the growth of vibrant communist movement (McDonough 2003).

Source F on the other hand, is written by a German historian. His perspective is biased; he defends Germany and allows others to recognise that it wasn’t just Germany’s fault. Source F argues that throughout Europe in the twentieth century Fascism and totalitarianism was taking a hold; it wasn’t solely a ‘German phenomenon.’ In Italy, Mussolini a Fascist gained control, “there were many similarities between Italian fascism and National Socialism” (MacDonough 2003:53). Mussolini also believed in military control, anti-socialism and believed in having a strong leader, along with a totalitarian state (Layton 2005). Like Germany, Italy’s economy was weak; Mussolini wanted to change and ‘played’ on the economic instability to rise to power. Therefore it can be argued that the political and economic weakness of a country, allows radical leaders to gain power.