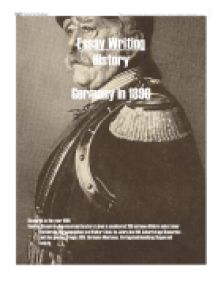 Essay Writing History Germany in 1890 Bismarck in the year 1894 Source: Bismarck. Des eisernen Kanzlers Leben in ann�hernd 200 seltenen Bildern nebst einer Einf�hrung. Herausgegeben von Walter Stein. Im Jahre des 100. Geburtstags Bismarcks und des gro�en Krieges 1915. Hermann Montanus, Verlagsbuchhandlung Siegen und Leipzig 1) How did the Germans get the Empire they wanted by 1890? Germany appeared as an Empire after the Franco-Prussian war in 1871. Otto Van Bismarck, Prussian Chancellor since 1862, knew that to unify an Empire, several aspects had to be organized. He became German Chancellor in 1871 and set up a constitution on the same year. With this, powers were separated into three different branches: The Kaiser, The Chancellor and the two Chambers. He also sought to control opposition. The Church was controlled with the May Laws (Falk) and the Kulturkampf. For socialists he passed the enabling law (1878) to control them, and several insurances to favour them. Bismarck also believed that an Empire ought to have colonies for industrial development. In 1789, he had to bring tariffs so as to raise money for his foreign policy. ...read more.

policy. He thought that people had to work in things related to the Empire. On the other hand, the Catholic Church followed a centrifugal (going away from the centre) policy. The Church looked for foreign countries, so Bismarck decided to attack it. Bismarck supported the German Catholic teachers who didn't agree (Old Catholics) with the idea of Papal Infallibity (1870). The Church intended to promote actions of the New Catholics, who followed the new doctrine. To solve this problem, Bismarck organized a campaign by the State against the Church known as the Kulturkampf. He was supported by the National Liberals while the Church was supported by the Centre Party. This campaign separated state and church affairs: Jesuits were expelled from Germany; German schools controlled by State inspectors, in 1874 Marriage had to take place before government-appointed officials. In May 1873-74-75, Falk, the Minister of Church Affairs, introduced the May (Falk) laws. This brought several changes as regards the Church: the Church was forbidden to excommunicate 'old' priests publicly, before starting priestly studies, people had to study at a state university and pass an examination, the state now accepted or neglected teaching posts to clergymen, Catholic educative establishments had to accept inspections by state officials and all religious orders were dissolved. ...read more.

He then decided to apply a system of protective tariffs which would help him to obtain money. Bismarck knew that Germany needed colonies to enhance its industrial development, in spite of possibly annoying Britain that could harm Germany in the future with the loss of Alsace and Lorraine. By promoting colonial expansions, Germany could obtain raw materials, markets for German goods and a "living space" (Lebensraum) for the growing population. In 1882, Bismarck intended to acquire colonies by forming a Colonial Union. Finally, in 1884, the major Powers agreed on a division of Africa. Germany obtained: South West Africa, Togoland and the Cameroons (1885), the naval base of Holigoland (1890) and obtained German East Africa with an agreement with Britain on the same year. Germany could be an Empire by 1890 due to Bismarck's achievements. He succeeded in organizing the empire by separating powers. He could control opposition since as he could dominate the Kaiser he could do as he pleased. He passed laws for the Socialists and the Church that allowed Germany to be a unified Empire. His intention was organizing Germany since he knew that for an Empire to be unified, it first had to be organized. His goal was finally achieved but he was forced to resign in 1890. ...read more.