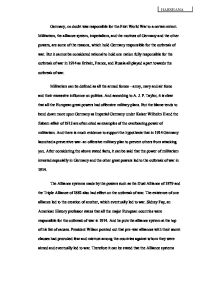 Germany, no doubt was responsible for the First World War to a certain extent.

The Alliance systems made by the powers such as the Dual Alliance of 1879 and the Triple Alliance of 1882 also had effect on the outbreak of war. The existence of one alliance led to the creation of another, which eventually led to war. Sidney Fay, an American History professor states that all the major European countries were responsible for the outbreak of war in 1914. And he puts the alliance system at the top of his list of causes. President Wilson pointed out that pre-war alliances with their secret clauses had provoked fear and mistrust among the countries against whom they were aimed and eventually led to war. Therefore it can be stated that the Alliance systems made by the powers held every nation somewhat responsible. ...read more.

The above given Fischer's assertions are now considered valid by many historians. Therefore it can be stated that Germany is considered guilty as her motives for war are clearly war provoking. According to Ruth Henig, France and Britain entered the war, as they believed their national interests to be threatened by the actions of Germany and Austria-Hungary in 1914. And they were not prepared to let Germany dominate Europe. Therefore they joined the war in order to restore the balance of power. After considering the above given facts, it can be seen that a large part of the blame goes to Germany. In conclusion, it can be stated that all powers played a role towards the outbreak of war in 1914. But it is fair to agree with Fischer's theory that Germany was more to blame. ...read more.