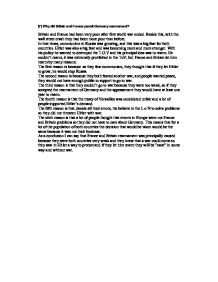 [7? Why did Britain and France permit Germany rearmament? Britain and France had been very poor after first world war ended. Beside this, with the wall street crash they had been more poor than before. In that times, communism in Russia was growing, and this was a big fear for both countries. Hitler was also a big fear and was becoming more and more stronger. ...read more.

The second reason is because they both feared another war, and people wanted peace, they would not have enough public to support to go to war. The third reason is that they couldn't go to war because they were too weak, so if they accepted the rearmament of Germany and the appeasement they would have at least one year to rearm. ...read more.

This means that for a lot of the population of both countries the decision that would be taken would be the same because it was not their business. As a conclusion I can say that France and Britain rearmament was principally caused because they were both countries very weak and they knew that a war could come so they saw in Hitler a way to protect and if they let him rearm they will be "save" in some way and without war. ...read more.