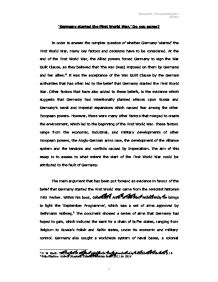 'Germany started the First World War.' Do you agree? In order to answer the complex question of whether Germany 'started' the First World War, many key factors and decisions have to be considered. At the end of the First World War, the Allied powers forced Germany to sign the War Guilt Clause, as they believed that 'the war (was) imposed on them by Germany and her allies.'1 It was the acceptance of the War Guilt Clause by the German authorities that has often led to the belief that Germany started the First World War. Other factors that have also added to these beliefs, is the evidence which suggests that Germany had intentionally planned attacks upon Russia and Germany's naval and imperial expansions which caused fear among the other European powers. However, there were many other factors that merged to create the environment, which led to the beginning of the First World War. These factors range from the economic, industrial, and military developments of other European powers, the Anglo-German arms race, the development of the Alliance system and the tensions and conflicts caused by Imperialism. The aim of this essay is to assess to what extent the start of the First World War could be attributed to the fault of Germany. ...read more.

The European powers believed in theory that the existence of alliances and treaties would maintain the balance of power. It was believed that alliances posed as a check upon the European powers, as the existence of an 'opposition of an equally formidable rival, or of a combination of several countries forming leagues of defence.' 8 However, in retrospect the existence of the alliance system is the main reason behind why many of the European powers became involved in the War. The alliance system led to introduction of two separate forces within Europe, which increased the hostility and fear within European foreign policy. In 1914, Germany believed that Austria-Hungry was their only dependable and trustworthy ally who had to be supported at all costs, which was an important motive for Germany's decision to join the War.9 Germany felt this feeling of external isolation due to a series of secret alliances, which had been made by the other European powers. In1902, Italy had signed a secret alliance with France, in which she declared her neutrality in the event of a Franco-German War. In addition to this, Britain also made ententes or sphere of influence agreements with France and Russia. ...read more.

a number as possible."14 The quick and glorious growth of the German naval fleet led to the fear of the British government, which pushed Britain closer towards the French and Russians. The situation between Germany and Britain was further aggravated by the rejection of all suggestions from Britain in terms of limited naval armaments.15 The situation between the two countries led to a more clear distinction between the European powers into two groups of the Triple Entente and the Triple Alliance. In conclusion, the question of whether Germany started the First World War can only be assessed after weighing up the importance of all the causes, which led to the War. Although, Germany played a significant part in the beginning of the Cold War, it can be argued that the First World War was a consequence of the all the factors added together. A true assessment of this question is summed up by Fischer, as he says that all the European powers bare the blame but "as Germany willed and coveted the Austro-Serbian war, and in her confidence in her military superiority, deliberately faced the risk of conflict with Russia and France, her leaders must bear a substantial share of the historical responsibility for the outbreak of general war. ...read more.