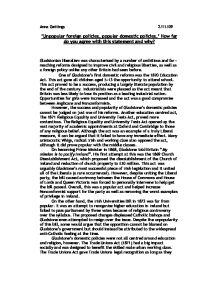 Gladstone's Government. Unpopular foreign policies, popular domestic policies. How far do you agree with this statement about Gladstones ministry and why?

Anna Gettings 2/11/09 'Unpopular foreign policies, popular domestic policies.' How far do you agree with this statement and why? Gladstonian liberalism was characterised by a number of ambitious and far-reaching reforms designed to improve civil and religious liberties, as well as a foreign policy unlike any other Britain had seen before. One of Gladstone's first domestic reforms was the 1870 Education Act. This act gave all children aged 5-13 the opportunity to attend school. This act proved to be a success, producing a largely literate population by the end of the century. Industrialists were pleased as the act meant that Britain was less likely to lose its position as a leading industrial nation. Opportunities for girls were increased and the act was a good compromise between Anglicans and Nonconformists. However, the success and popularity of Gladstone's domestic policies cannot be judged on just one of his reforms. Another education centred act, The 1871 Religious Equality and University Tests Act, proved more contentious. The Religious Equality and University Tests Act opened up the vast majority of academic appointments at Oxford and Cambridge to those of any religious belief. ...read more.

The Trade Unions Act (1871) had a big impact socially and was designed to benefit the skilled male urban working class. The Trade Unions Act gave Trade Unions legal recognition as long as they registered their funds. However, this act outlawed peaceful picketing which caused widespread anger amongst Trade Union members and led to much campaigning for change. Evidence suggests that this act led to Disraeli and the Conservatives making gains in urbanised areas that had been traditionally Liberal, e.g. Oldham. The Licensing Act of 1872 was another act that proved unpopular. It restricted the opening hours of many pubs and led to some areas becoming completely alcohol free. This legislation was not particularly Liberal; it is thought that Gladstone produced such a measure in order to please Nonconformist supporters of the party rather than to stick to his own principles. Many brewers and publicans who had previously supported the Liberals swapped their allegiances to the Conservative party. In addition to this, the act was unpopular among the working classes who opposed such a restriction on their freedom. ...read more.

So, how popular were Gladstone's domestic policies? His domestic reforms can be regarded as wholly positive, creating a fresh outlook and direction for governments to come. His policies often favoured the newly enfranchised skilled working class, therefore winning him large amounts of support. However, many of his reforms caused divisions within in the Liberal party, perhaps compromising their unity. Also it could be said that some of his decisions, such as the Licensing act, alienated key voting groups. Because of the reasons detailed, I do agree that his domestic policies were popular to an extent but think that by 1874 they contributed to the end of his first ministry. Overall, I am inclined to agree that Gladstone's foreign policy was an unpopular one. It was used as the key condemnation of Gladstone in Disraeli's opposition campaign, as well as causing many patriots who believed in the maintenance and expansion of the British Empire to defect from the Liberal party. To summarise, I believe that Gladstone's foreign policies were generally unpopular but his domestic reforms divided opinion and therefore it is difficult to accurately assess the extent of their popularity. ...read more.