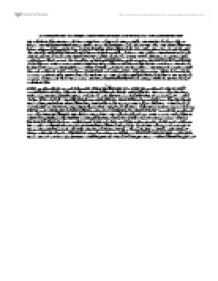 GOVERNMENT POLICY WAS THE KEY CAUSE OF THE WALL STREET CRASH. HOW FAR DO YOU AGREE?

GOVERNMENT POLICY WAS THE KEY CAUSE OF THE WALL STREET CRASH. HOW FAR DO YOU AGREE WITH THIS VIEW? The Wall Street Crash, which occurred in October 1929, was the mass selling of shares, which led to a massive drop in prices, which prompted further selling of shares. In one day, $14 billion was wiped off the value of the stock market. This panic selling was triggered by rumours and fears that the stock market was about to collapse (these rumours were brought about by large share holders, like Baruch and Kennedy dumping shares, and news of the collapse of the British financial empire which was financed by debt and credit, just like America's). But why did a sudden loss of confidence have such massive repercussions? The answer lies in the long term problems in the economy which had created instability and weaknesses in the economy. Until October 1929 these weaknesses had been masked by the confidence of American people and businesses; the high prices of stocks and shares were the result of speculation - the belief or confidence that they were worth more. But as confidence crumbled, there was nothing left to sustain the economy. The key reason why the economy could not sustain itself was because the policies of the government had created major faults in the American economy, and in every area of the economy, which meant that what started as mass selling of shares resulted in a major Wall Street Crash. ...read more.

Whilst in principle these actions were supportive, in practice they artificially propped up the German economy, which led to massive investment in Germany ($3,900million was invested after the Dawes Plan) as investors hoped to make a quick buck, just like they were in the American 'get rich quick' / speculative economy. This meant that government policy had in fact encouraged investment at home and abroad based on speculation. When investors realised that the returns (values) of stocks at home and abroad were artificially high, it would trigger a loss of confidence and massive sales - i.e. the Wall Street Crash. Another reason why government policies caused the Wall Street Crash is because the government pursued a laissez faire policy towards businesses and regulation. As a result, the 1920s were characterised by the creation of trusts and corporations - such as US Steel. The government actively ignored anti-trust laws, rather than using their federal powers to police and regulate industry. In a case heard at the Supreme Court the government argued that big businesses were not illegal, so long as some competition remained. However, in reality, the trusts wiped out competition - fixing prices and swallowing up smaller businesses (for every 4 businesses that succeeded in the 1920s, 3 failed). As a result, 1000s of smaller businesses failed, whilst the trusts became 'captains of industry', with the knowledge and the money to produce things very quickly and efficiently. ...read more.

The post-war Agricultural Credits Act funded 12 banks to offer loans to any farmers working co-operatively. However, the Act ultimately meant more smaller farmers became in debt. The larger farmers who could afford the loans squeezed the small farmers out of the market. Prohibition made farmer's problems even worse by cutting the need for grain previously used in alcohol. Ultimately, America's unequal distribution of wealth should have signalled to the government that its capitalist system was not working - and steps should have been taken to alleviate the imbalanced spending power. Because the government did not alleviate the situation, the divide grew bigger (making these people dependent on credit / loans, which they couldn't repay because of their lack of employment) - making the economy more fragile and unstable. Therefore, in October 1929, when a massive amount of selling began in the New York Stock Exchange, a mad panic set in. The confidence bubble had burst - triggered by a few rumours and fears that the market was going to crash. Had the government not pursued such a laissez faire approach to the management and regulation of banking and business, and had it responded earlier to the rich / poor divide in American society, the Wall Street Crash would never have happened because there would not have been such over-inflated / false confidence; there would have been foreign markets to trade with; and banks, businesses and individuals would have been regulated and acting in the interest of long-term not short-term gains. ...read more.