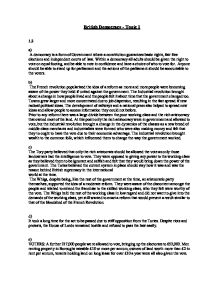 British Democracy - Topic 1 1.2 a) A democracy is a form of Government where a constitution guarantees basic rights, fair free elections and independent courts of law. Within a democracy all adults should be given the right to vote on equal footing, and be able to vote in confidence and have a choice of who to vote for. Anyone should be able to stand up for parliament and the actions of the parliament should be accountable to the voters. b) The French revolution popularized the idea of a reform as more and more people were becoming aware of the power they held if united against the government. The Industrial revolution brought about a change in how people lived and the people felt it about time that the government changed too. Towns grew larger and more concentrated due to job dispersion, resulting in the fast spread if new radical political ideas. The development of railways and a national press also helped to spread new ideas and allow people to access information they could not before. Prior to any reform there was a large divide between the poor working class and the rich aristocracy that owned most of the land. ...read more.

f) Cholera had swept the nation, proof of moral conscience in the urban working class, many protests for reform including Hyde Park riots triggered fears of an uprising similar to that of the French Revolution. g) Electorate was increased by 400,000 voters allowing those paying �1 in tax or with savings over �50 to be given the vote. Qualifications for the franchise in counties was reduced from �50 to �15. The act itself was passed by Disraeli, a conservative, thus taking it away from the liberals and making themselves stronger as a party and changing the political dynamics of the time. h) The ballot act of 1872 introduced a secret voting system allowing voters to cast their vote in private, away from the eyes of their influential landlords. Previously the elections took place in public. This allowed crooked MPs to bribe or intimidate voters otherwise punishing them later for not showing loyalty. The Ballot Act significantly reduced the amount of corruption and malpractice that had took place in previous elections. The Corrupt and Illegal Practices Act of 1883 further reduced corruption through reducing the amount of money candidates could spend in election depending on the size of constituency and reasons for expenditure. ...read more.

The journey to a fairer political system started with the First Reform Act of 1832, which extended the franchise to the middle class and redistributed parliamentary seats. This is followed by the second reform act which has a similar more effective result. In 1867 the Ballot Act, saw the introduction of a secret ballot brought down corruption and an end to intimidation. The Corrupt and Illegal Practices Act of 1883 reduced the amount of corruption through setting strict and effective limits on the expenditure of candidates. The franchise was further extended to give two out of three men the vote in 1884 through the Third Reform Act. The next year The Redistribution of The Seats Acts established many single member constituencies. The Parliament Act of 1911 inhibited the powers of the House of Lords and limits the life a parliament to five years. 1911 was also the year that saw the introduction of the payment to MP's, which meant that anyone could stand up for MP. The 1918 Representation of the People Act meant that all men over 21 and women over 30 were given the vote. In 1928 women and men were given the vote on equal grounds. ...read more.