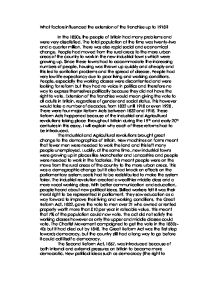 What factors influenced the extension of the franchise up to 1918? In the 1850s, the people of Britain had many problems and were very dissatisfied. The total population at the time was twenty-two and a quarter million. There was also rapid social and economical change. People had moved from the rural areas to the more urban areas of the country to work in the new industrial towns which were growing up. Since these towns had to accommodate the increasing numbers of people, housing was thrown up quickly and cheaply and this led to sanitation problems and the spread of disease. People had very low life expectancy due to poor living and working conditions. People, especially the working classes were discontented and were looking for reform but they had no voice in politics and therefore no way to express themselves politically because they did not have the right to vote. Extension of the franchise would mean giving the vote to all adults in Britain, regardless of gender and social status. This however would take a number of decades, from 1832 until 1918 or even 1928. There were four major Reform Acts between 1832 and 1918. ...read more.

New political ideas such as democracy (the right to govern and rule yourself and liberalism (the right to express opinions freely) had emerged in Europe and as Britain had supported these ideas in Italy with unification, she could not deny her people their rights. There had also been revolutions in France. Some feared this might happen in Britain and so it hindered reform at first. Later others were keen to grant reform to avoid violence. Groups inside Britain were also putting pressure on the government for more change. These groups included trade unions, the labour party and suffrage groups. The working class were becoming more educated and respectable and so politicians no longer saw them as an unruly mob and felt they were more deserving of the vote. The Second Reform Act, 1867, increased the electorate by 1 million voters. Now one in three men could vote. However the right to vote still depended on property ownership and the value of the property owned. Nevertheless, the 1867 Reform Act was an important step towards democracy. The old belief that the working classes were an unthinking mob was ending. ...read more.

This was a very significant step to democracy. The electorate had trebled, from roughly seven million to twenty-one million. 8.5 million Women over thirty were given the vote. The industrial working class had became, for the first time, the majority in a mass electorate, this was to play a part in a changed political identity, as it helped the labour party to grow. In 1928 there was further franchise reform as all women were given the vote on equal terms to men. In conclusion, many factors influenced the extension of the franchise up to 1918. There was a growth in democracy in Britain for many reasons Economic change caused by the Industrial and Agricultural revolutions in Britain meant that different places especially in the North and Midlands of England had to be represented. This was the first thing to bring change. Everyone wanted a say in government. The people wanted social change to improve living and working conditions but they needed a voice in parliament first. Better communication and improved education meant a greater interest in democracy. The great reform act was only a start - other acts would bring more change and eventually Britain would become a democracy. The impacts of world war one sped up change even more and helped further extend the franchise to women. ...read more.