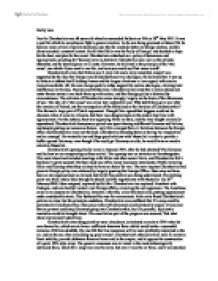 Guilty men Neville Chamberlain was 68 years old when he succeeded Baldwin as PM on 28th May 1937. It was a post for which he would never fight a general election. As he was being groomed as future PM, he became more critical of policy decisions, sure that he could do better on foreign matters, and his diary recorded a constant lament. He felt that Hitler was the 'bully of Europe', and decided to hope for the best, and plan for the worst. Chamberlain embarked on a policy of deterrence and appeasement, searching for 'decency even in dictators'. Chamberlain saw war as the ultimate absurdity, and he desired peace at all costs. However, he believed in the principle of the 'vital cause', one which if you went to war for, and won you could say 'that cause is safe'. Chamberlain's view that Britain was 'a very rich and a very vulnerable empire' was supported by the idea that Europe was divided between two ideologies. ...read more.

Chamberlain's honeymoon period was spent chasing indifferent Germans and Italians, and despite putting out numerous feelers, very little emerged from it. Relations between the foreign office and Chamberlain were not the best, Chamberlain branding them as having 'no imagination and no courage'. He wanted to try and forge good relations with Mussolini in order to provide a buffer against Germany, even though if he could get Germany on side, he would have no need to entertain Mussolini. Chamberlain's opening finally came in Autumn 1937, after he had admitted 'The Germans and Italians are as exasperating as they can be'. The opening was an invitation to Berchtesgaden. This went ahead and included meetings with Hitler and other senior Nazis, and Chamberlain felt it had been 'a great success'. He then made one of his many inaccurate statements of faith, believing Hitler and Goering when they claimed to have no desire for war. ...read more.

He also felt that 'our resources will be more profitably employed in the air, and on the sea, than in building up great armies'. Chamberlain's other priorities were to maintain fiscal stability, provide defensive forces at home and in the empire, and to oppose the construction of a great 1914 style army. The general consensus was to invest in the most technologically advanced force, which for a long time was the navy, but now it was the air force, and it was decided to accelerate fighter production, a decision that would pay off during the war. Chamberlain was quoted at times as saying 'production has begun in earnest' and 'the almost terrifying power that Britain is building up has a sobering effect on the opinion of the world'. 'Cato' however believed that Hitler was anything but terrified. Chamberlain's greatest priority was to neutralise the German threat, but the road to that was closed, and so Chamberlain decided to work on agreements with Italy and France. ...read more.