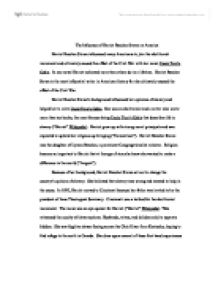 Harriet Beecher Stowe influenced many Americans to join the abolitionist movement and ultimately caused the offset of the Civil War with her novel Uncle Toms Cabin.

After the Fugitive Slave Act of 1850 was passed, Harriet Beecher Stowe was moved to write as a way to force the nation to look at its immoral system of slavery ("Connecticut"). "Harriet set about writing a polemical novel illustrating the moral responsibility of the entire nation for the cruel system" ("Harriet" Pinn). The Fugitive Slave law granted the Southerners the right to pursue fugitive slaves into free states. This aroused many abolitionists to action (Smith). This included Harriet and she wanted to write about the conventions of the times (Gerson 28). The only national issue that bothered Harriet was slavery so she wrote decided to write her feelings in a work of fiction (Coil 89). Uncle Tom's Cabin was first printed as a serial in an abolitionist paper called The National Era and later printed as a book in 1852. "On the first day, 3,000 copies were sold, within a few days, 10,000 were gone, and by April 1st the book was in its second edition" ("Harriet" Pinn). It was an immediate success when it was first published in 1852 and by 1857 Uncle Tom's Cabin had been translated into many languages and sold over half a million copies ("Connecticut"). ...read more.

Uncle Tom's Cabin contributed to the war because it brought the evils of slavery to the attention of Americans more vividly that any other book had done before ("Harriet" Harriet Beecher Stowe Center). It has even been said that it affected British readers and kept Britain from joining the American Civil War on the Confederate side ("Uncle Tom's Cabin"). Harriet Beecher Stowe Thesis: Harriet Beecher Stowe influenced many Americans to join the abolitionist movement and ultimately caused the offset of the Civil War with her novel Uncle Tom's Cabin. Introduction I. Background A. Family History B. Abolitionist C. Wanted to make a difference II. Experiences with slavery A. Moved to Cincinnati B. Viewed slave auctions and other cruelties of slavery C. Friends with slave owners and slaves III. Why She wrote Uncle Tom's Cabin A. Fugitive Slave Act of 1850 B. Shows the immorality of slavery IV. Success of Uncle Tom's Cabin A. Started as a serial then turned into a novel B. Sold many copies and translated to many languages C. One of the most influential novels of the 19th century D. Success in England V. Impact on Society A. President Lincoln's quote B. Kept Britain from helping Confederacy C. Brought evils of slavery to the attention of Americans D. ...read more.