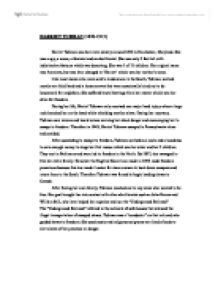 Harriet Tubman was born into slavery around 1820 in Dorchester, Maryland. She was a spy, a nurse, a feminist and an abolitionist.

HARRIET TUBMAN (1820-1913) Harriet Tubman was born into slavery around 1820 in Dorchester, Maryland. She was a spy, a nurse, a feminist and an abolitionist. She was only 5 feet tall with indistinctive features which was deceiving. She was 1 of 11 children. Her original name was Araminta, but was later changed to 'Harriet' which was her mother's name. Like most slaves who were sold to landowners in the South, Tubman worked mostly as a field hand and a house servant but was occasionally hired out to do housework for neighbors. ...read more.

They met in Baltimore and were led to freedom in the North. By 1857, she managed to free her entire family. However the Fugitive Slave Law made in 1850 made freedom precarious because this law made it easier for slave owners to hunt down escapees and return them to the South. Therefore Tubman was forced to begin leading slaves to Canada. After freeing her own family, Tubman reached out to any slave who wanted to be free. Her goal brought her into contact with other abolitionists such as John Brown and William Still, who later helped her organize and run the "Underground Railroad" The "Underground Railroad" referred to the network of safe houses that allowed the illegal transportation of escaped slaves. ...read more.

She gave him advice about the Underground Railroad in the East and promised to deliver aid. However, she was not present for the raid because she was ill. The civil war in 1860's did not end Tubman's resistance to slavery so she served as a nurse for 3 years. After the war, Tubman returned to Auburn, New York and continued to help blacks forge new lives in freedom. She made money by selling her copies of her autobiography and by giving speeches. Harriet Tubman has freed over 300 slaves via the Underground Railroad and has never lost a fugitive or allowed one to turn back. For her undying faith and courage, she was nicknamed the "Black Moses". ...read more.