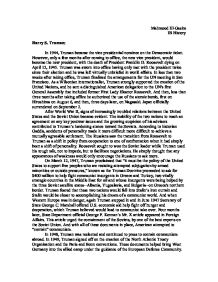 Mahmood El-Gasim IB History Harry S. Truman: In 1944, Truman became the vice presidential nominee on the Democratic ticket. However, only a few months after coming to office, the new vice president, would become the new president, with the death of President Franklin D. Roosevelt dying on April 12, 1945. Truman was sworn into office having only met with the president twice since their election and he was left virtually unbriefed in world affairs. In less than two weeks after taking office, Truman finalized the arrangements for the UN meeting in San Francisco. As a Wilsonian internationalist, Truman strongly supported the creation of the United Nations, and he sent a distinguished American delegation to the UN's first General Assembly that included former First Lady Eleanor Roosevelt. ...read more.

Roosevelt sought to woo the Soviet leader while Truman used his tough talk, not to impede, but to facilitate negotiations. He simply thought that any appearances of weakness would only encourage the Russians to ask more. On March 12, 1947, Truman proclaimed that "it must be the policy of the United States to support free peoples who are resisting attempted subjugation by armed minorities or outside pressures," known as the Truman Doctrine proceeded to ask for $400 million to help fight communist insurgents in Greece and Turkey, two vitally strategic countries in the Middle East for oil and whose insurgents were being helped by the three Soviet satellite states--Albania, Yugoslavia, and Bulgaria--on Greece's northern border. ...read more.

These documents helped bring West Germany into the allied camp under the guidance of the European Defense Community. Most of Truman's failures came in Asia. He was accused of losing China to communism, when he was unable to assure the success of the Nationalists over the communists in the conclusion of the Chinese civil war. Then on June 25, 1950, the communist North Korean army invaded South Korea. Two days later, the President sent U.S armed forces under the leadership of General MacArthur, in an effort to contain the spread of Communism, which seemed to be spreading over Asia. Truman later fired MacArthur for publicly challenging Truman's orders. In 1952, Truman announced that he would not seek a third term, and returned to private life, dying at age 88 on December 26, 1972. ...read more.