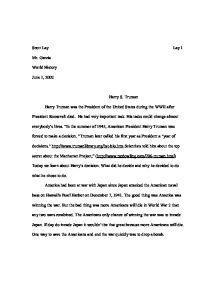 Scott Lay Lay 1 Mr. Garcia World History June 1, 2002 Harry S. Truman Harry Truman was the President of the United States during the WWII after President Roosevelt died. He had very important task. His tasks could change almost everybody's lives. "In the summer of 1945, American President Harry Truman was forced to make a decision. "Truman later called his first year as President a "year of decisions." http://www.trumanlibrary.org/hst-bio.htm Scientists told him about the top secret about the Manhattan Project," (http://www.mrdowling.com/706-truman.html) Today we learn about Harry's decision. What did he decide and why he decided to do what he chose to do. America had been at war with Japan since Japan attacked the American naval base on Hawaii's Pearl Harbor on December 7, 1941. ...read more.

Harry had some advisors that suggested him to drop the Lay 2 atomic bomb in the ocean. But no one knew how strong it is or if it would work or not. So if they do drop it in the ocean and it works and is really strong it would be a waste. "America only had two atomic bombs." (http://www.mrdowling.com/706-truman.html) Harry's advisors also suggested that he should warn the enemy before dropping the atomic bomb. Harry was told to make a decision to drop this bomb on Japan. His decision was yes. Harry decided to drop the atomic bomb on the Japanese city of Hiroshima. On August 9, and he dropped the second bomb on the city of Nagasaki. ...read more.

(http://www.mrdowling.com/706-truman.html) In June 1945 Harry Truman witnessed the signing of the charter of the United Nations, hopefully established to preserve peace. Lay 3 Truman left the presidency and retired to Independence in January 1953. For the nearly two decades of his life remaining to him, he delighted in being "Mr. Citizen," as he called himself in a book of memoirs. (http://www.trumanlibrary.org/hst-bio.htm) He spent his days reading, writing, lecturing and taking long brisk walks. He took particular satisfaction in founding and supporting his Library, which made his papers available to scholars, and which opened its doors to everyone who wished to have a glimpse of his remarkable life and career. Harry S. Truman died on December 26, 1972. ...read more.