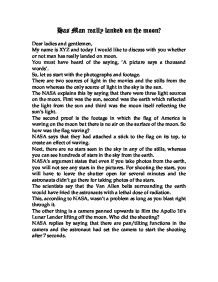 Has Man really landed on the moon?

Has Man really landed on the moon? Dear ladies and gentlemen, My name is XYZ and today I would like to discuss with you whether or not man has really landed on moon. You must have heard of the saying, 'A picture says a thousand words'. So, let us start with the photographs and footage. There are two sources of light in the movies and the stills from the moon whereas the only source of light in the sky is the sun. The NASA explains this by saying that there were three light sources on the moon. First was the sun, second was the earth which reflected the light from the sun and third was the moon itself reflecting the sun's light. ...read more.

The scientists say that the Van Allen belts surrounding the earth would have fried the astronauts with a lethal dose of radiation. This, according to NASA, wasn't a problem as long as you blast right through it. The other thing is a camera panned upwards to film the Apollo 16's Lunar Lander lifting off the moon. Who did the shooting? NASA replies by saying that there are pan/tilting functions in the camera and the astronaut had set the camera to start the shooting after 7 seconds. One NASA picture shows Neil Armstrong taking his first step on the moon. If Armstrong was the first person to land on the moon, who took the shot? ...read more.

(2) Attention: At this time, the Vietnam War was going on. People did not like what was going on with Vietnam, so, to get there minds off the War, the US faked the moon landing. The dates show that we abruptly stopped going to the moon around the same time the War ended. (3) The Cold War: Back in the late 60s and early 70s, the US and Russia were in a heated battle to see who was better. And when Russia sent the first man to space, the US couldn't just sit back. They had to do something to prove that they were better than Russia. So they planned the landing on Moon. Whether or not you believe that we went to the moon, I hope that some interesting questions have been brought to your mind through this speech. Thank you. ...read more.