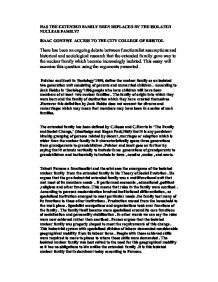 Has the extended family been replaced by the isolated Nuclear Family?

HAS THE EXTENDED FAMILY BEEN REPLACED BY THE ISOLATED NUCLEAR FAMILY? ISAAC GONDWE ACCESS TO THE CITY COLLEGE OF BRISTOL There has been an ongoing debate between functionalist assumptions and historical and sociological research that the extended family gave way to the nuclear family which became increasingly isolated. This essay will examine this question using the arguments presented . Fulcher and Scott in 'Sociology'1999, define the nuclear family as an isolated two generation unit consisting of parents and unmarried children . According to Jack Hobbs in 'Sociology'1986,people who have children will have been members of at least two nuclear families . The family of origin into which they were born and the family of destination which they have created themselves .However this definition by Jack Hobbs does not account for divorce and remarriages which may mean that members may have been in a series of such families. ...read more.

Talcott Parsons a functionalist and theorist sees the emergence of the isolated nuclear family from the extended family in his Theory of Social Evolution . He argues that the pre-industrial extended family was a multifunctional unit that met most of its members needs . It performed economic , educational ,political ,religious and other functions .This means that roles in the family were ascribed . According to parsons modernisation involved institutional differentiation , as specialised institution emerged to meet particular needs .the family lost many of its functions to these other institutions . Production moved from the household to the work place . Specialist occupations and organisations took over functions of the family . ...read more.

The isolated nuclear family was best suited to the need for this geographical mobility as it has no obligations to kin unlike the extended family .It is this isolated nuclear family that is dominant today according to Parsons. Concurring with Talcott Parsons is William J. Goode who surveyed various parts of the world . He says that industrialisation undermined the extended family and larger groupings . Goode explains that the high rate of geographical mobility in industrial society decreases the frequency and intimacy of contact among members of the kin network . Unlike Parsons, Goode also considers the move to nuclear family has been far more rapid than supposed from the degree of industrialiasation alone .Goode believes ideology of the nuclear family has encouraged its growth in the western ideas and life styles which are later spreading world wide. ...read more.