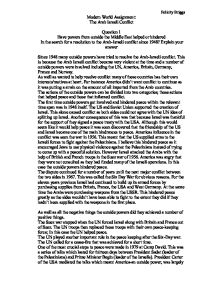 Have powers from outside the Middle East helped or hindered In the search for a resolution to the Arab-Israeli conflict since 1948? Explain your answer

Felicity Briggs Modern World Assignment: The Arab Israeli Conflict Question 1 Have powers from outside the Middle East helped or hindered In the search for a resolution to the Arab-Israeli conflict since 1948? Explain your answer Since 1948 many outside powers have tried to resolve the Arab-Israeli conflict. This is because the Arab Israeli conflict became very violent at the time and a number of outside powers were involved including the UN, America, Britain, Germany, France and Norway. As well as wanted to help resolve conflict many of these countries has their own interests/motives at heart. For instance America didn't want conflict to continue as it was putting a strain on the amount of oil imported from the Arab countries. The actions of the outside powers can be divided into two categories; those actions that helped peace and those that inflamed conflict. The first time outside powers got involved and hindered peace within the relevant time span was in 1948 itself. ...read more.

In this case the outside powers hindered peace. The dispute continued for a number of years until the next major conflict between the two sides in 1967. This was called the Six Day War for obvious reasons. For the eleven years previous Israel had continued to build up its armed forces by purchasing supplies from Britain, France, the USA and West Germany. At the same time the Arabs were purchasing weapons from the USSR. This hindered peace greatly as the sides wouldn't have been able to fight to the extent they did if they hadn't been supplied with the weapons in the first place. As well as all the negative things the outside powers did they achieved a number of positive things. The Suez war stopped when the UN forced Israel along with Britain and France out of Suez. The UN troops then replaced these troops with their own peace-keeping force; In this case the UN helped peace. ...read more.

However from this point it become harder to define what helped peace and what hindered it. This was obviously supposed to be a step towards peace some people disagreed with them including people from both the Arab and Israeli groups. Although a Declaration of Principles was made and agreed by both sides conflict still continued after this as a result. Therefore it is hard to say whether the outside powers helped peace or not although there intention was obviously to solve the conflict. In conclusion I have found out that peace in the Arab Israeli conflict has been like a roller coaster. Although outside powers have tried to achieve peace, especially the UN, overall they have been a great hindrance to peace in the Middle East that seems to suggest that if Israel was not supplied with arms by the different countries and if America hadn't signed the Friendship treaty the conflict might be closer to being resolved. I believe that overall the outside powers hindered the Arab-Israeli conflict rather than achieving peace. ...read more.