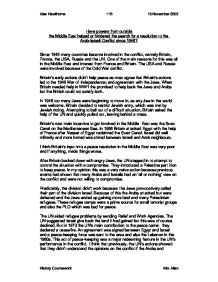 Have powers from outside the Middle East helped or hindered the search for a resolution to the Arab-Israeli Conflict since 1948?

Have powers from outside the Middle East helped or hindered the search for a resolution to the Arab-Israeli Conflict since 1948? Since 1948 many countries became involved in the conflict, namely Britain, France, the USA, Russia and the UN. One of the main reasons for this was oil in the Middle East and interest from France and Britain. The USA and Russia were involved because of the Cold War conflict. Britain's early actions didn't help peace as most agree that Britain's actions led to the 1948 War of Independence; and agreement with the Jews. When Britain needed help in WW1 the promised to help back the Jews and Arabs but the British could not satisfy both. In 1946 too many Jews were beginning to move in, as any Jew in the world was welcome. Britain decided to restrict Jewish entry, which was met by Jewish rioting. Attempting to bail out of a difficult situation, Britain asked the help of the UN and quickly pulled out, leaving behind a mess. Britain's next main incentive to get involved in the Middle East was the Suez Canal on the Mediterranean Sea. ...read more.

The UN suggested Israel give back the land it had gained but this was of course declined. But in 1973 the UN's main contribution to the peace came: they declared a ceasefire. An agreement was signed between Egypt and Israel and a peace-keeping force was sent to the area and also the Lebanon in the 1980s. This act of peace-keeping was a major redeeming feature in the UN's performance in the conflict. I think that previously, the UN's actions showed that they didn't understand the opinions on the conflict if the Arabs and Israelis, but a peace agreement was the right step to take in the search for peace. Russia was the main super-power that had an effect on the conflict. During the cold war Russia supplied Arab states with weapons which of course didn't encourage peace. When the Six Day War broke out, Russia sided with the Arabs and broke off diplomatic relations with Israel. Countries from outside taking sides caused problems in almost all cases in the conflict. Soon after the PLO was started, Russia backed the terrorism. ...read more.

An attempt to control peace amongst terrorist groups (mainly PLO) in 1983 went wrong when 146 were killed in an attack on their base in the Lebanon. After the Gulf War and the collapse of the Soviet Union, the USA was left with the most control over the conflict. President Clinton offered Yasser Arafat a deal which seemed too good be true (as mentioned in question 2) but he declined. To clear things up, Clinton brokers another agreement but Baruk loses an election and the new leader Sharon is swept to power. He is a violent man. To this day the USA has seemed biased towards the Israelis and most believe they were not forceful enough. All in all the USA has done the best job in the search for peace, mainly because of their control, but early on when Russia had similar control over the conflict, they acted very badly in trying to resolve the conflict. Britain's involvement wasn't as influential as the super-powers' but generally they were unhelpful and left a sticky situation to the UN. Other than the UN's poor decision to introduce a partition, they acted well and the ceasefire was an important step. Alex Hawthorne 11S 18 November 2002 History Coursework Mrs Allan ...read more.