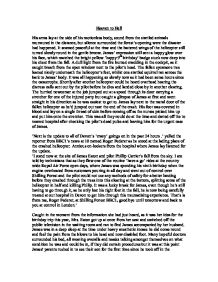 Heaven to Hell His arms lay at the side of his motionless body, sound from the startled animals murmured in the distance, but silence surrounded the forest's opening were the disaster had happened. It seamed peaceful at the time and the battered wings of the helicopter still turned slowly round in the gentle breeze. James' expression still sent a happy glow over his face, which matched the bright yellow 'happy 9th birthday' badge stuck now deep into his chest from the fall. A dull light from the fire burned crackling in the cockpit, as it caught breath from the open window next to the pilot's head. The fallen sycamore tree leaned nicely underneath the helicopter's feet, whilst one startled squirrel ran across the bark to James' body. It was all happening so slowly now as it had been some hours since the catastrophe. Shortly after another helicopter could he heard overhead hearing the distress calls sent out by the pilot before he dies and landed close by in another clearing. The hurried newcomer at the job jumped out at a speed through its door carrying a stretcher for one of the injured party but caught a glimpse of James at first and went straight in his direction as he was easiest to get to. James lay next to the metal door of the fallen helicopter as he'd jumped out near the end of the crash. ...read more.

While this was going on James just turned slightly as his mind awakened again and his soul now drifted upwards. What probably wasn't clear at first was him and him parents were Christians, in fact they'd just returned a few days a go from one of their annual trips with their church which was very strong on youth development and James loved it there, and it as by this feeling of security in My church that he got baptized last year to proclaim his faith towards Me, My son, and the Holy Spirit. But now as James' soul moved closer and closer to the gates of Heaven none of that mattered, he was home. His mind and soul took the place of his body and his eyes opened to the bright light around him and he could see for miles. Through the clouds, and then denser things out of any human knowledgeable place to reach My glorious kingdom. His eyes pondered the excitement of his arrival looking slightly bewildered but soon found his soul yearning for more of what his life was now to be, and he entered. He looked around My creation in awe. He could not see his body, but by no reaction from people he saw, he came to the conclusion he was invisible. There was golden bricks on the floor for paths and roads but each city he flew across had no cars of buses, a completely free space mixed of churches and people. ...read more.

down when faced with many people standing outside waiting for them and tried to fight their way out, but as they did one scared gang member brought out a gun to James and his friend who were fighting him, and threatened to shoot if they didn't back off. The two did so but the man shot anyway, in a freak accident of nerves but could not help his mistake and shot himself too at the site of what he'd done, and dropped dead in an instant. The two laying on the floor has startled everyone else so they scattered around the town to escape when the police came to try and keep them alive to get them in a better condition. The doctors had now found one bullet in each friend, both in the head but had not grazed too much brain to kill them. The only problem was that if they removed it, would it open a blood clot and start pouring out from the wound. The doctors pondered this for a while and began on James first deciding it's better out than in at the point, but it clipped an artery on the way out, as well as the wound being open for flow of blood and he started to lose it rapidly. It was too much to live on at the time and again his soul moved out from his body, but drifted downwards this time. ...read more.