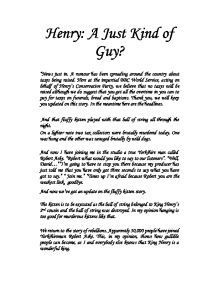 Henry: A Just Kind of Guy?

Henry: A Just Kind of Guy? "News just in. A rumour has been spreading around the country about taxes being raised. Here at the impartial BBC World Service, acting on behalf of Henry's Conservative Party, we believe that no taxes will be raised although we do suggest that you get all the overtime in you can to pay for taxes on funerals, bread and baptisms. Thank you, we will keep you updated on this story. In the meantime here are the headlines. And that fluffy kitten played with that ball of string all through the night. On a lighter note two tax collectors were brutally murdered today. One was hung and the other was savaged brutally by wild dogs. And now I have joining me in the studio a true Yorkshire man called Robert Aske. ...read more.

In my opinion hanging is too good for murderous kittens like that. We return to the story of rebellions. Apparently 30,000 people have joined Yorkshireman Robert Aske. This, in my opinion, shows how gullible people can become, as I and everybody else knows that King Henry is a wonderful king. Now we are going back to the prison where the fluffy kitten is to be executed". "Thank you David. I am here at Dung Bells Prison and I am about to speak to the Murderous kitten herself!!!! Hello little kitten what would you like to say for yourself." " Meeeooowww. More news just in. Robert Aske has started a 'peaceful' demonstration - a pilgrimage. It has spread down to York where I have heard that Lord Darcy has given up York Castle and apparently he did not require much persuasion. ...read more.

I'm so upset because.... oh I can't go on" " Thank you Mrs Jones you have my sympathy. On a lighter note King Henry, against his better nature, has given in to the protesters. So as I said before there will be no more tax rises. And now we are going to the same prison where the fluffy kitten was executed to witness the execution of the fluffy kitten's owner. Now who's that? Is it the King? It is, what is he doing here? Oh its alright listeners, they are not going to kill the King, they are here to kill the 200 pilgrims that's all. Oh and look there is Lord Darcy. So listeners the King prevails yet again. Three cheers for the King. By Andrew Buchanan ...read more.