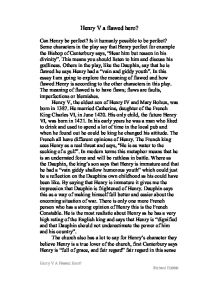 Henry V a flawed hero? Can Henry be perfect? Is it humanly possible to be perfect? Some characters in the play say that Henry perfect for example the Bishop of Canterbury says, "Hear him but reason in his divinity". This means you should listen to him and discuss his godliness. Others in the play, like the Dauphin, say that he is flawed he says Henry had a "vain and giddy youth". In this essay I am going to explore the meaning of flawed and how flawed Henry is according to the other characters in this play. The meaning of flawed is to have flaws; flaws are faults, imperfections or blemishes. Henry V, the eldest son of Henry IV and Mary Bohun, was born in 1387. He married Catherine, daughter of the French King Charles VI, in June 1420. ...read more.

Dauphin says this as a way of making himself fell better and easier about the oncoming situation of war. There is only one more French person who has a strong opinion of Henry this is the French Constable. He is the most realistic about Henry as he has a very high rating of the English king and says that Henry is "dignified and that Dauphin should not underestimate the power of him and his country". The church also has a lot to say for Henry's character they believe Henry is a true lover of the church, first Canterbury says Henry is "full of grace, and fair regard" fair regard in this sense means he is well respected within the church. Then Ely adds "a true lover of the holy church" from these two sentences we can tell that Henry is very religious and is respected within his religion in his country and well known among the highest ranks in the church. ...read more.

After this speech in Agincourt the soldiers gain a lot of trust between the them and Henry this is essential we know this not because of anything said by a character but by the way the go in and out of the battle. Therefore I conclude that Henry was flawed such as he was immature but he was not as flawed as the French made him out to be. I think Shakespeare saw Henry has a idol for other English people at the time the story was written. I think this because at the time England was a harsh place to live, with all the poverty and lack of services we take for granted now. This means many people may have resorted to drink to help the problem and this story would have helped to bring hope to people who needed it. But who can be perfect? Henry V A Flawed Hero? Richard Hubble ...read more.