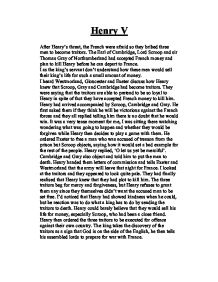 Henry V - After Henry's threat, the French were afraid so they bribed three men to become traitors.

Henry V After Henry's threat, the French were afraid so they bribed three men to become traitors. The Earl of Cambridge, Lord Scroop and sir Thomas Gray of Northumberland had accepted French money and plan to kill Henry before he can depart to France. I as the king's servant don't understand how these men would sell their king's life for such a small amount of money. I heard Westmorland, Gloucester and Exeter discuss how Henry knew that Scroop, Gray and Cambridge had become traitors. ...read more.

It was a very tense moment for me, I was sitting there watching wondering what was going to happen and whether they would be forgiven while Henry then decides to play a game with them. He ordered Exeter to free a man who was accused of treason from the prison but Scroop objects, saying how it would set a bad example for the rest of the people. Henry replied, 'O let us yet be merciful'. ...read more.

I'd noticed that Henry had showed kindness when he could, but he reaction was to do what a king has to do by sending the traitors to death. Henry could barely believe that they would sell his life for money, especially Scroop, who had been a close friend. Henry then ordered the three traitors to be executed for offence against their own country. The king takes the discovery of the traitors as a sign that God is on the side of the English, he then tells his assembled lords to prepare for war with France. ...read more.