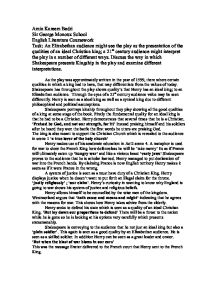 Henry V - Discuss the way in which Shakespeare presents Kingship in the play and examine different interpretations.

Amin Kareem Bedri Sir George Monoux School English Literature Coursework Task: An Elizabethan audience might see the play as the presentation of the qualities of an ideal Christian king; a 21st century audience might interpret the play in a number of different ways. Discuss the way in which Shakespeare presents Kingship in the play and examine different interpretations. As the play was approximately written in the year of 1599, there where certain qualities in which a king had to have, that may differentiate from the values of today. Shakespeare has throughout the play shows quality's that Henry has an ideal king; to an Elizabethan audience. Through the eyes of a 21st century audience value may be seen differently. Henry is seen as a ideal king as well as a cynical king due to different philosophical and political assumptions. Shakespeare portrays kinship throughout they play showing al the good qualities of a king at some stage of the book. Firstly the fundamental quality for an ideal king is that he had to be a Christian. Henry demonstrates that several times that he is a Christian. 'Praised be God, and not our strength, for it!' ...read more.

Henry tries exactly that in scene 5 act 2 everyone signs the treaties that will make Henry and his son heirs to the throne of France. Marrying Kate brings the nations of France and England together as one. Due to different political views Dauphin doesn't approve of Henry's kingship. In the French court is a total comparison to the English one. In the French court Dauphin perceives Henrys as 'vain, giddy, shallow, humorous youth.' Ironically this shows Henry's own naivet�. The Kingship has different values and morals to Henry's. Looking at it from a different political view Henry can be perceived as a cynical King. 'Take pity of your town and of your people' By hearing this one could interpret that Henry should think about the souls he is going to take and the consequences. In scene 3 act 3 Henry can also be interpreted here as a cynical king. He presents to the Governor a realistic sense of what is going to happen. 'impious war' He talks about rape and murder and makes it seem that he shows concern for the souls of the people who will die. But it can be seen as just a front. ...read more.

It can be argued that the soldiers can't recognise him in the flesh. This symbolises how distant the king is from his soldiers. In conclusion, I feel that Shakespeare is presenting his opinion about kingship is that the qualities that characterize a good sovereign are not inevitably in line with the same as the qualities that describe a good person. I feel that Shakespeare presents Henry's gripping skill to connect with his people and motivate them to accomplish his purpose as the primary condition of good leadership 'you, good yeomen'. I value Henry as an extremely king. He is exceedingly bright, persistent, and inspirational to his soldiers. In turn this presenting Henry as the epitome of a good leader and king. All in all despite the bad interpretations of Henry V I understand him to be an ideal king for his time. I believe that Shakespeare put the French as a symbolic reference to what a kingship shouldn't be similar to. I understand that Shakespeare's representation of the king shows that authority causes difficulties to distinguish between being a hero or a villain. I believe that Shakespeare presents Henry as the hero and great king and what values a king should have. Whereas the French should be seen as a good example of what a awful kingship should be in reminiscent of. ...read more.