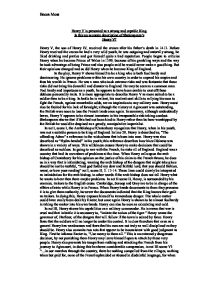 Henry V is presented as a strong and capable King. Is this an accurate description of Shakespeare's Henry V?

Henry V is presented as a strong and capable King. Is this an accurate description of Shakespeare's Henry V? Henry V, the son of Henry IV, received the crown after his father's death in 1413. Before Henry received the crown he had a very wild youth, he was outgoing and naturally strong, he liked drinking and parties and got himself quite a bad reputation. People began to criticise Henry when he became Prince of Wales in 1399, because of his gambling ways and the way he took advantage of being Prince and also people said he would never make a good king. But their opinions changed and so did Henry when he became King of England. In the play, Henry V shows himself to be a king who is both fool hardy and domineering. He ignores problems within his own country in order to expand his empire and thus his wealth in France. He was a man who took extreme risks and was fortunate that these risks did not bring his downfall and disaster to England. He may be seen as a common man. Fool hardy and impetuous as a youth, he appears to have been unable to cast-off these dubious personality traits. It is more appropriate to describe Henry V as more suited to be a soldier than to be a king. In battle he is valiant, his motivational skills to rallying his men to fight the French, against remarkable odds, are an inspiration to any military man. ...read more.

The whole matter could have easily been dealt by Exeter, but once again Henry is shown to be almost foolhardy in taking the matter into his own hands. Henry can also be seen as calculating and cold. In act III, Henry shows his capabilities as a military commander. He is aware that war is cruel and that in battle it is necessary to, "imitate the action of the tiger." Henry warns the governor of, Harfleur, of the dangers that will follow if the town is seized by force. Henry fears that the soldiers will no longer be under his control. It is clear therefore that even as a general Henry has weaknesses and fears that his men are not truly as well disciplined as they should be. Henry also commits two acts that appear to be inconsistent with good judgment as King. First he informs Exeter to, "Use mercy to them all." This is an extremely dangerous decision; by not punishing them Henry may leave himself open to attack by these very people. Henry also prevents his troops from robbing and attacking the French from his journey to Agincourt, in doing this he shows considerable compassion, in act III scene VI "...in our marches through the country, there be nothing compelled from the villages, nothing taken but paid for, none of the French upbraided or abused in disdainful language; for when lenity and cruelty play for a kingdom, the gentle gamester is the soonest winner." ...read more.

British losses we are expected to believe four titled men and, "of all other men but five and twenty." It seems that Shakespeare was inferring that the battle was comic and its outcome even more comic. Such a victory shows that either the French incompetent and unbelievably stupid or the British were nearly invincible. Finally in the epilogue, Shakespeare through the chorus reminds us that the succeeding king, "Lost France and made his England bleed..." line 12, epilogue. This shows the futility of the acts of Henry V. Because he won in France, the British may see Henry V as a hero. This victory should also be viewed against the motivations in going to war. Henry's naivety and inability to make decisions is shown when he approached Canterbury on the merits of his claim to the French throne. A strong and decisive leader would not require the help of men who obviously would have a vested interest in the outcome. As a youth, Henry was hot-headed and strong willed. The decision to invade France in order to further his claim shows that he has changed little. The act of placing British into a battle, where they were outnumbered five to one, is an appalling fact. Henry's poor judgment and his failure to settle problems within England are unforgettable. In short, the British should be appalled by such a king, there is little doubt his impetuosity could very well have caused even greater problems to Britain. Becca Moss ...read more.