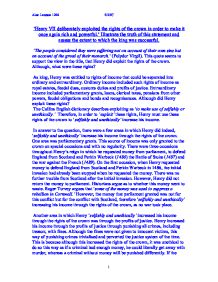 'Henry VII deliberately exploited the rights of the crown in order to make it once again rich and powerful.' Illustrate the truth of this statement and assess the extent to which the king was successful

'Henry VII deliberately exploited the rights of the crown in order to make it once again rich and powerful.' Illustrate the truth of this statement and assess the extent to which the king was successful. 'The people considered they were suffering not on account of their own sins but on account of the greed of their monarch.' (Polydor Virgil). This quote seems to support the view in the title, that Henry did exploit the rights of the crown. Although, what were these rights? As king, Henry was entitled to rights of income that could be separated into ordinary and extraordinary. Ordinary income included such rights of income as royal estates, feudal dues, customs duties and profits of justice. Extraordinary income included parliamentary grants, loans, clerical taxes, pensions from other powers, feudal obligations and bonds and recognisances. Although did Henry exploit these rights? The Collins English dictionary describes exploiting as 'to make use of selfishly or unethically.' Therefore, in order to 'exploit' these rights, Henry must use these rights of the crown to 'selfishly and unethically' increase his income. In answer to the question, there were a few areas in which Henry did indeed, 'selfishly and unethically' increase his income through the rights of the crown. ...read more.

(Elton). This is shown by his ability to increase the crown's income by any means possible (as shown above) as well as using all the other means of accumulating wealth lawfully and efficiently. As for making the crown more powerful, it is a different story. Henry had a policy of making illegal retaining (the employment of private armies) as difficult as possible. However, these private armies that were retained by nobles were vital to England's war machine. Therefore, as Henry made it harder and harder for nobles to retain, the power of England to be 'capable of producing great effects of any kind,' became smaller. However, with the increase in wealth came an increase in security, and with an increase in security came and increase in power. This is because Henry could become 'capable of producing great effects of any kind,' in his own country and, with financial means, abroad. In conclusion, 'Henry VII deliberately exploited the rights of the crown in order to make it once again rich and powerful' is a statement, which is not entirely true. Although Henry did exploit the rights of the crown to some extent, he did use a lot of other means to make the crown once again rich and powerful. Alex Lawson 1204 5/2/07 1 ...read more.