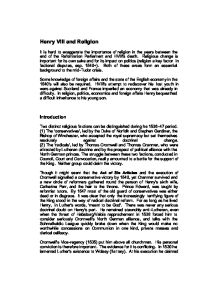 Henry VIII and Religion It is hard to exaggerate the importance of religion in the years between the end of the Reformation Parliament and HVIII's death. Religious change is important for its own sake and for its impact on politics (religion a key factor in factional disputes, esp. 1540+). Both of these areas form an essential background to the mid-Tudor crisis. Some knowledge of foreign affairs and the state of the English economy in the 1540's will also be required. HVIII's attempt to rediscover his lost youth in wars against Scotland and France imperiled an economy that was already in difficulty. In religion, politics, economics and foreign affairs Henry bequeathed a difficult inheritance to his young son. Introduction Two distinct religious factions can be distinguished during he 1536-47 period. (1) The 'conservatives', led by the Duke of Norfolk and Stephen Gardiner, the Bishop of Winchester, who accepted the royal supremacy but set themselves resolutely against doctrinal change. (2) The 'radicals', led by Thomas Cromwell and Thomas Cranmer, who were attracted by Lutheran doctrine and by the prospect of political alliance with the North German princes. ...read more.

was clearly recognised at the time. The Bishops Book (The Institution of a Christian Man) of September 1537 was a further attempt to define the official faith. It singled out the three sacraments acknowledged in 1536 as superior, but also accepted the other four. However, dubious theology and bad grammar condemned it in Cranmer's view and Henry did not approve it. In the sense that it failed to advance towards the Lutheran position, the Bishops' Book marked a defeat for Cromwell. The Second Injunctions of September 1538 contained two significant reforms. A Bible 'of the largest volume' was to be placed in every parish church, and every parish priest was to keep a register of all baptism, marriages and burials performed by him. - the cost to be shared by parson and parish. In addition the campaign against images, shrines, pilgrimages and holy days was intensified. Cromwell played the key role in the promotion of the English Bible which fulfilled Convocation's request to Henry in 1534 for a satisfactory translation. At that time only William Tyndale's translation of the New Testament (1526 in Germany) ...read more.

'You were born in a happy hour,' Cromwell had once told Cranmer. 'Do or say as you will, the King will always well take it at your hand.' On the other hand, the conservative party never really recovered from the fall of Katherine Howard. Southampton died in 1542, Suffolk in 1545. Gardener, stiff and reactionary and wisely never trusted with the highest office, fell from the Council. Norfolk, old and ill, lay under sentence of death in 1547, his son the Earl of Surrey already executed. It was also apparent that there could never be a full return to Catholic orthodoxy. In December 1545 Henry made his famous speech to Parliament. He was 'sorry to hear how the Word of God is rhymed, sung and jangled in every alehouse and tavern' and he made a moving appeal for moderation and uniformity - and uncanny echo of a similar plea by Cromwell in 1540, and evidence that the English Church was already assuming a character of its own and doctrinal tendency which the King, try as he might, could not altogether prevent. That tendency was to be defined more clearly in Edward's reign, reversed catastrophically in Mary's, and re-asserted more moderately in Elizabeth's. Note ...read more.