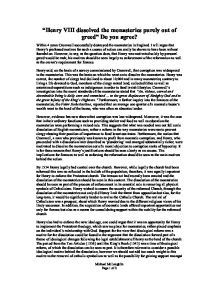 &quot;Henry VIII dissolved the monasteries purely out of greed&quot; Do you agree?

"Henry VIII dissolved the monasteries purely out of greed" Do you agree? Within 4 years Cromwell successfully destroyed the monasteries in England. I will argue that Henry's professed motives for such a course of action can easily be shown to have been without foundation. However, to say, as the question does, that Henry was motivated solely by personal greed would be rash; his motives should be seen largely as enforcement of the reformation as well as the crown's requirement for finance. Henry said, on the basis of a survey commissioned by Cromwell, that corruption was widespread in the monasteries. This was the basis on which he went on to dissolve the monasteries. Henry was correct, the number of clergy had declined to about 10,000 and in many monasteries, contrary to living a life devoted to God, members of the clergy rented land, collected tithes as well as entertained superstitions such as indulgences in order to fund lavish lifestyles. ...read more.

The treason act had recently been enacted and the dissolution of the monasteries should be seen in this context. The dissolution of the monasteries should be seen as part of the process of enforcement in its essential role in removing all physical symbols of Catholicism. Henry wished to ensure the security of the reformed Church, through the dissolution of the monasteries not only did Henry limit the threat from opposition but also, for the long-term, it would be significantly harder to revive the Catholic Church. The revival of Catholicism was a prospect, about which Henry worried due to the different religious views of his likely successor. In addition, the acquisition of monastic lands offered important opportunities not only for finance but also as a means for consolidating support within the nobility for the reformed church. Henry also had to enforce the new ideology, one could argue that it was an opportunity for Henry to implement the Protestant theology, which saw no place for monasteries, rather placed emphasis on the individual's relationship with God. ...read more.

While it is inevitable that greed was part of Henry's motives when faced with this possible inflation of the crown accounts, it is clear that at this time Henry had more important uses for money in terms of foreign policy and the reformation. Therefore, it would be rash to place undue prominence on greed when it is clearly outweighed by other motives. I conclude, therefore, that the dissolution was not driven, as some have suggested, by Henry's personal greed. Seen in the context of a time when Henry needed to consolidate and enforce reformed church the objectives of destroying catholic symbolism, limiting threats from opposition to the new church as well as beginning ideological reform can be seen as fulfilling this aim. Furthermore, the monetary requirements should also be seen as an important motive, which, in terms of buying support, can also be seen as relevant to the consolidation of the reformation. It is flawed to suggest that the motive behind the dissolution was purely personal greed, money and more importantly the need for enforcing the reformation were the main motives. Michael McLoughlin Page 2 of 2 ...read more.