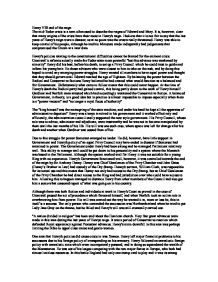 Henry VIII end of the reign.

Henry VIII end of the reign The mid-Tudor crisis is a term often used to describe the reigns of Edward and Mary. It is, however, clear that many origins of the crisis have their roots in Henry's reign. I believe that it is not fair to say that the last years of Henry's reign were a disaster, as at no point was the crown really threatened. Henry was able to keep control of his people, although he and his Ministers made indisputably bad judgements that compromised the Crown at a later date. Henry's policies relating to the constitutional difficulties cannot be blamed for the eminent crisis. Cromwell`s reforms actually made the Tudor state more powerful "but this advance was weakened by minority" Henry did his best, before his death, to set up a Privy Council which he could trust to guide and inform his young heir. He chose advisors who were closest to him to take on the task, and by doing this hoped to avoid any emerging power struggles. Henry wanted all members to have equal power and thought that they should govern until Edward reached the age of Eighteen. By balancing the power between the Radical and Conservative factions Henry believed he had created what would function as a balanced and fair Government. Unfortunately what came to follow meant that this could never happen. ...read more.

1540 they were once again at each others throats and Henry no longer needed his ugly bride for her connections, so divorced her quickly. In June Henry had made up his mind that he should go into battle. Making an alliance with Charles they both went to war against France. Henry and Charles seem to both have had their own intentions in this invasion, although there was an agreed rendezvous in Paris which was subsequently ignored. "Neither Henry nor Charles intended to keep their bargain it was just a matter of who would double cross the other first" In this case it was our own Henry who strayed first. It was no wonder though that he didn't make it to Paris as he had to be carried by his Army due to ill health, which inevitably slowed things down. Henry did however manage to capture Boulogne. Norfolk's campaign failed, and on the same day Charles returned to the Netherlands to deal with problems there and eventually made peace with France. By capturing Boulogne Henry believed that he would be at the fore front of European matters. Henry took the tact which we are used to from Monarchs of this period, he squandered money in return for glory and prestige. Henry wished to be a warrior King who was strong and powerful so for him war was a must, Boulogne cost Henry a great deal of money after he took control of it as he then had to fortify at a substantial cost. ...read more.

Another of the areas which Henry neglected during the last years of his reign was learning, literature, education and art. An area that was a disaster in Henry's last years was his love life. Anne Of Cleves proved so unattractive that he had the marriage annulled, Catherine Howard, a beautiful women who Henry was much in love with, was terribly unfaithful and was beheaded. It has been said that this marriage broke Henry's heart and disheartened him greatly and this shows in his next choice of wife, Catherine Parr. Catherine had clear Protestant learning's and was kind and looked after Edward and Elizabeth making sure they had a Protestant education. In marrying Catherine Henry ensured that his children were looked after and the confusion that he had over religion would not become imbedded in them also. His marriage to Catherine made sure that Elizabeth turned out to be a great queen. Henry VIII died on January 28th 1547. He had attained more absolute authority then almost any other ruler of England with remarkably little disturbance through an epoch-making change in Church and Religion, from which he emerged as supreme head of the church. He had helped found the English Navy. He had played an active, if rather futile, role in European diplomacy and dissipated the carefully husbanded resources of his father. Henry, although he did not do everything right, secured his succession and the throne and his reign was never under any great threat. I believe, therefore, that Henry was a success. ...read more.