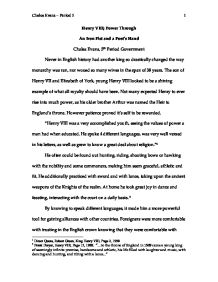 Henry VIII; Power Through An Iron Fist and a Poet's Hand

Henry VIII; Power Through An Iron Fist and a Poet's Hand Chalea Evans, 5th Period Government Never in English history had another king so drastically changed the way monarchy was ran, nor wooed so many wives in the span of 38 years. The son of Henry VII and Elizabeth of York, young Henry VIII looked to be a shining example of what all royalty should have been. Not many expected Henry to ever rise into much power, as his older brother Arthur was named the Heir to England's throne. However patience proved it's self to be rewarded. "Henry VIII was a very accomplished youth, seeing the values of power a man had when educated. He spoke 4 different languages, was very well versed in his letters, as well as grew to know a great deal about religion."1 He often could be found out hunting, riding, shooting bows or hawking with the nobility and some commoners, making him seem graceful, athletic and fit. He additionally practiced with sword and with lance, taking upon the ancient weapons of the Knights of the realm. At home he took great joy in dance and feasting, interacting with the court on a daily basis. 2 By knowing to speak different languages, it made him a more powerful tool for gaining alliances with other countries. ...read more.

Taking too long Henry VIII separated from the Church, and named himself head of the new Church of England, selfishly granting himself a divorce from Catherine and naming Anne his new Queen. None dared to challenge a king who commanded the forces of religion, as well as the loyalties of every man he surrounded himself with. The Catholics seeked revenge against Henry VIII for what he had done to their beloved Queen, however it was Catherine's love that saved him, and she refused to let the forces strike. At the time of the marriage Anne had been pregnant, later giving birth to another girl, the second daughter for Henry VIII. The king was greatly uneased, 5 A year later news reached him that Catherine had died, a once again the pregnant Anne and Henry rejoiced, seeing the downfall of his "enemy." While out riding Henry had taken a fall and had been knocked unconscious, later Anne blamed her next miscarriage on worrying over him. He became infuriated and ordered her locked away. Soon after he had her beheaded for witchcraft and treason with other men, and had his 2nd daughter Elizabeth sent away, the next day engaging the young Jane Seymour. "The act of uniting with Jane in holy matrimony had brought about a union between England and Wales."6 A great boasting could be heard from Henry as it was announced that Jane was pregnant with Henry's child. ...read more.