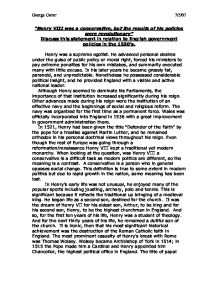 &quot;Henry VIII was a conservative, but the results of his policies were revolutionary&quot; Discuss this statement in relation to English government policies in the 1530's.

"Henry VIII was a conservative, but the results of his policies were revolutionary" Discuss this statement in relation to English government policies in the 1530's. Henry was a supreme egotist. He advanced personal desires under the guise of public policy or moral right, forced his ministers to pay extreme penalties for his own mistakes, and summarily executed many with little excuse. In his later years he became grossly fat, paranoid, and unpredictable. Nonetheless he possessed considerable political insight, and he provided England with a visible and active national leader. Although Henry seemed to dominate his Parliaments, the importance of that institution increased significantly during his reign. Other advances made during his reign were the institution of an effective navy and the beginnings of social and religious reform. The navy was organized for the first time as a permanent force. Wales was officially incorporated into England in 1536 with a great improvement in government administration there. In 1521, Henry had been given the title "Defender of the Faith" by the pope for a treatise against Martin Luther, and he remained orthodox in his personal doctrinal views throughout his reign. Even though the rest of Europe was going through a reformation/renaissance Henry VIII kept a traditional yet modern monarchy. ...read more.

Ultimately, he was a victim of his times. The 16th century was a confusing mess of changing loyalties, betrayals, near-constant fighting, and most importantly, a rising scepticism of that great institution of the fading medieval world, the Roman Catholic Church. With the advent of the printing press a century before, literacy and intellectual debate grew rapidly. The High Renaissance in Italy occurred during the first 20 years of Henry VIII's reign. It was a time of unparalleled scientific experiment, intellectual fervour, and spirited debate. In such a time, traditional views of kingship were bound to change for both the ruler and those he ruled. So from an early age it is apparent that he does posses conservative views. Cromwell's reforms actually made the Tudor state more powerful "but this advance was weakened by minority" Henry did his best, before his death, to set up a Privy Council which he could trust to guide and inform his young heir. He chose advisors who were closest to him to take on the task, and by doing this hoped to avoid any emerging power struggles. Henry wanted all members to have equal power and thought that they should govern until Edward reached the age of eighteen. ...read more.

Other historians such as Joel Hurstfield and John Guy, both argue (bravely against Elton) that parliaments power did not increase and the roles of parliament didn't change. They back up their statement by saying that Cromwell basically held parliament in "contempt" to be used to pass laws that Henry told them to do. To some extent parliament didn't exist as a mainframe in Government as Henry created a Privy Council of those he trusted. My opinions lye towards arguing with Elton because Henry VIII's reign was revolutionary due to major changes in European policy and English policy. Once separated from Rome, Henry could see his sovereignty over the people. Which brought back sovereignty, which is party of a conservative monarchy re-instating power over the masses. Elton's theory is not one that should be ignored as it does prove to be significant when studying a mixed view subject. I believe that is some elements of Henry's reign his ministers were more powerful than himself and perhaps his ministers were controlling the country at one point, but overall Henry disposed of the powerful ministers, Wolsey, was used as a scapegoat when Henry wanted a divorce, this caused ex-communication from Rome and Cromwell abused his position and was punished for it. Henry, once again showing Sovereignty and diminishing Elton's theory. George Carter 7/5/07 ...read more.