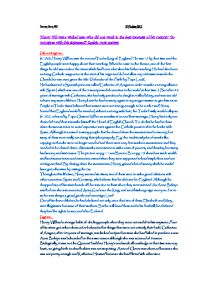 'Henry VIII was a wicked man who did not work in the best interests of his country' - Do you agree with this statement? Explain your answer.

Yanrong Jiang 8NB 16th/October/2003 'Henry VIII was a wicked man who did not work in the best interests of his country.' Do you agree with this statement? Explain your answer. I do not agree... In 1509, Henry VIII became the second Tudor King of England. He was 17 by that time and the English people were happy about their new king. When he came to the throne, one of the first things he did was reduce the taxes which had been a lot when his father was king. He had also been a strong Catholic supporter at the start of his reign and did not allow any criticisms towards the Church; he was even given the title 'Defender of the Faith' by Pope LeoX. He had married a Spanish princess called Catherine of Aragon in order to make a strong alliance with Spain ( which was one of the 2 most powerful countries in the world at that time ). But after 24 years of marriage with Catherine, she had only produced a daughter called Mary, and was too old to have any more children. Henry knew he had to marry again to a younger woman to give him a son. ...read more.

I agree... Henry VIII had a strange habit of ditching people when they were not useful to him anymore. Four of his wives got either divorced or beheaded for things that were not entirely their fault. Catherine of Aragon, after 24 years of marriage, was kicked out just because she had failed to produce a son. Anne Boleyn was beheaded for the same reason although she was accused of treason. Biologically, it was not the Queens' fault but Henry's and medical knowledge at that time was very basic, so giving birth to dead babies was not surprising. Anne of Cleves was divorced because she was not pretty enough and Katherine Howard because she had flirted with other men. Henry was very fond of hunting, gambling and dancing so he had only an hour a day on government business. He left most of it to his ministers whom he could always execute when they mad an unpopular decision. Six years after Henry asked the Pope for a divorce in 1527 and got refused, he had thought about making himself the Head of the English Church by changing the country to Protestant. Many people opposed him. Among them, there were: his Lord Chancellor Thomas More, The Pope himself, King Charles V of Spain and many more. ...read more.

In the end, Robert Aske was burnt at stake. Conclusion: Henry was not a wicked man as most people see him as. He grew up as a king which meant he could absolutely have anything he wanted and everyone should obey him. He was not used to the idea of people not agreeing on the same thing as him. And so the only thing he could do in order to tell people that he was always right was to execute those ones who disobeyed him. However he was not there to witness the executions of his Lord Chancellors, advicers and wives, and so he did not know what it was like. Also he did not want to; he knew if he did then his mind would be swayed by their words of pleading and asking for mercy. From a family point of view, he was a good husband and father. He loved his wives and children, but even them as he saw it, should not disagree with him. And those ones who did were sadly beheaded. Henry was a very complex character, although to many people, he did not seem to be a good king, but considering his own situation there was very little he could do to make everyone and himself happy at the same time. ...read more.