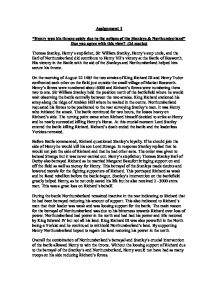 &quot;Henry won his throne solely due to the actions of the Stanleys &amp; Northumberland&quot; Due you agree with this view?

Assignment 1 "Henry won his throne solely due to the actions of the Stanleys & Northumberland" Due you agree with this view? (24 marks) Thomas Stanley, Henry's stepfather, Sir William Stanley, Henry's step uncle, and the Earl of Northumberland did contribute to Henry VII's victory at the Battle of Bosworth. His victory in the Battle with the aid of the Stanleys and Northumberland helped him secure his throne. On the morning of August 22 1485 the two armies of King Richard III and Henry Tudor confronted each other on the field just outside the small village of Market Bosworth. Henry's forces were numbered about 6000 and Richard's forces were numbering them two to one. Sir William Stanley held the position north of the battlefield where he would wait observing the battle centrally between the two armies. King Richard stationed his army along the ridge of Ambien Hill where he waited in the centre. Northumberland requested his forces to be positioned to the rear surveying Stanley's men. It was Henry who initiated the attack. The battle continued for two hours, the losses heavy on Richard's side. The turning point came when Richard himself decided to strike at Henry and he nearly succeeded killing Henry's Horse. ...read more.

This caused people to look to other potential candidates. As Richard lost support Henry gained. If Richard had been a popular King and well liked by his Nation then they would not have looked towards others such as Henry. As Henry was the last descendant of the house of Lancaster he was the last Lancastrian claimant. This was due to the death of Edwards's only child whom was supposedly murdered by Richard in order for him to usurp the throne. This made Henry's claim to the throne stronger and allowed the people to support a contender who would be a new and better King and who was entitled to the crown as much as Richard. Another factor that helped Henry to become King was Richard's bad tactical decision before the Battle of Bosworth. From France Henry landed in Wales on 7 August and was able to gather support on his way to the battle. Due to Henry's heritage he was able to uphold his roots and gather welsh support and more men as he made his way towards Market Bosworth in Leicestershire. By 12 August Henry had persuaded Rhys ap Thomas, the most influential landowner in South Wales with the promise of the Lieutenancy of Wales should Richard be defeated. ...read more.

Overall Henry won his throne due to Richard III weaknesses and own usurpation of the throne. As Richard was so unpopular and many people were not happy with his ruling this provided Henry the opportunity to be a rival to the throne. Without the loosing support of Richard, Henry would not have had so many people on his side. People wanted a stronger monarchy and felt that Henry was a better person to take the crown. Without the betrayal of Elizabeth Woodville and the loyalty of his mother, Margaret Beaufort, Henry would not have had many supporters when he returned from exile. This also secured his marriage with Elizabeth of York uniting the two houses offering strength and stability within the country. Henry also gained the support of the French army and the Welsh, which helped him win in the battle of Bosworth as he had a strong force. However without the help of the Thomas Stanley, William Stanley and Northumberland Henry would not have been victorious in the Battle of Bosworth. Without their betrayal to Richard, Henry would not have many men and survived, as William Stanley saved his life by killing Richard. Consequently from having the help of the Stanley's and Northumberland Henry was able to win the battle but that factor alone did not solely win Henry the throne. ...read more.