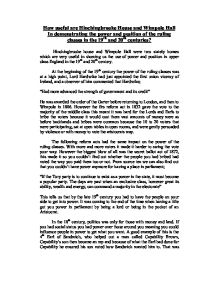 How useful are Hinchingbrooke House and Wimpole Hall In demonstrating the power and position of the ruling classes in the 19th and 20th centuries? Hinchingbrooke house and Wimpole Hall were two stately homes which are very useful in showing us the use of power and position in upper class England in the 19th and 20th century. At the beginning of the 19th century the power of the ruling classes was at a high point, Lord Hardwike had just appointed the first union viceroy of Ireland, and a observer of him commented that Hardwike; "Had more advanced the strength of government and its credit" He was awarded the order of the Garter before returning to London, and then to Wimpole in 1806. However the firs reform act in 1832 gave the vote to the majority of the middle class this meant it was hard for the Lords and Earls to bribe the voters because it would cost them vast amounts of money were as before backhands and bribes were common because the 10 to 20 voters that were participating, sat at open tables in open rooms, and were gently persuaded by violence or with money to vote the aristocrats way. ...read more.

of Sandwich in source 11; "His son, the eighth Earl served as the M.P for Huntingdon and was the first chairmen of the county council; he never married but entertained lavishly at Hinchingbrooke and included among his guests King Edward VII, the last monarch to visit Hinchingbrooke." This shows that even though he wasn't a lord or anyone imp-particularly powerful in government he still lived the life style of someone who was because he had local status. The events that occurred at Wimpole Hall can be matched up against the national trend. The owners of Wimpole Hall were well known members of the aristocracy, and therefore had power, for example Lord Hardwike held the lord lieutenancy of the board of agriculture, and then his nephew held the lord lieutenancy of Cambridge, this continues all the way up to 1891 with visits from the Queen and entreating foreign royalty as well. However in 1891 Wimpole was put on the market as a result of the 5th Earl's extravagant spending (champagne Charlie). It failed to reach the reserve price and so was handed over to the Agar-Robartes bank to pay off some of the 5th Earl's �300,000 debt. ...read more.

He was also a nationally important figure because of his connections with royalty, the Army and other various overseas postings. During the First World War, the 8th Earl accepts wounded officers to the house to recover; this shows that Hinchingbrooke retained the facilities needed to hold Guests were as by this time Wimpole was passed over by the billeting officers because it was not up to date. By 1945 we can see that the power of the Earls is fading because the west wing was demolished as an expense and decline of in the number of servants meant it was no longer necessary. When he finally becomes the 10th Earl in 1962 Victor Montague became the first member of the House of Lords to renounce his title in order to stay in the House of Commons. In conclusion I believe that Hinchingbrooke and Wimpole are good at demonstrating power and position in the ruling classes in there area, I say this because the two homes are both near each other so they cant represent the power of the ruling classes over the whole of the country, they can however show you how the ruling classes demonstrated power and position in Cambridge. James O'Connell 10c1 ...read more.