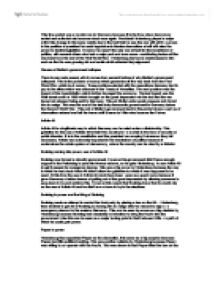 Hindenburg and the Causes of Mullers government collapse.

This time period was a crucial one for Germany because it is the time when democracy ended and authorial rule became about once again. President Hindenburg played a major roll in this change in Germany mainly due to the fact that he was the one with all the power, in the position of president he could appoint and dismiss chancellors at will with also the power to decide legislation. However he wasn't the only one at fault for the breakdown of politics, with several others who had a major part and even some contributing factors all the way back from the end of the First World War. Hindenburg had some weaknesses to him such as that he was growing old and senile which affected his judgement. Causes of Muller's government collapse There is one main reason which comes from several factors of why Muller's government collapsed. This is the problem of money which generates all the way back from the First World War, which is of money. These problems started with the reparations Germany had to pay to the allies which was enforced in the Treaty of Versailles. The next problem was the impact of the hyperinflation which further damaged the economy. ...read more.

This again undermines the democracy by showing that what the people think has no bearing on the chancellor and laws passed Scheilder in power and the Hitler gaining power Schlieder upset by Papen's reactionary policies turned against him and managed to persuade several ministers to turn against him from his cabinet, which forced him from office. Scheilder now chancellor decided to try and gain control of the Nazi party, Hitler now joined Papen in attempt to oust Scheilder. Schleicher faced a vote of no confidence after he couldn't form a coalition and Hindenburg refused to bend the constitution for his needs then accepted his resignation. Hindenburg then appoints Hitler as the chancellor and Papen as vice-chancellor. This is the biggest mistake Hindenburg makes because he knows that Hitler has extremist measures in mind which could can the face of the way the country is ran and allows him to gain power even though previously has been completely against this. There are several factors which explain why Hindenburg allowed Hitler to get into power, these are; Papen convinces him that in this new government Hitler can be controlled from his extreme measures. There coalition has the most support with the DNVP agreeing to join it. ...read more.

This was towards the end of this period in time and allowed Hitler to take out his political opposition by legalised murders. The consequences of this period of time The main consequence of this period of time was the full dictatorship of Hitler with the power to do whatever he wanted with very little opposition to him. This in turn led the road to the Second World War. So the years 1930 to 1933 were extremely important in German history especially because of the aftermath and the road to war. Hindenburg had a major role in the breakdown from politics between 1930 and 1933 because he was willing to use Article 48 and therefore allow the chancellor to rule by virtual dictatorship through him. Also Hindenburg was the one who appointed the chancellors, so appointing Hitler as chancellor even though he knew him to have extreme measures in mind was one of the biggest mistakes he could have made. Even though there were several other people who share some of the blame for the breakdown of politics in these years, Hindenburg has to shoulder the majority of the blame because he was the one with all the power in Germany. "A pattern was established of right-wing politicians believing that they could use the Nazi to bring about the sort of authoritarian Germany they wanted, but actually played into Hitler's hands" Finlay Mckichan ...read more.