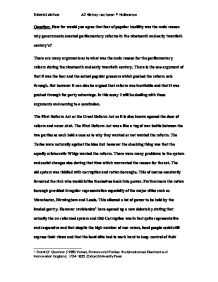 Question: How far would you agree that fear of popular hostility was the main reason why governments enacted parliamentary reforms in the nineteenth and early twentieth century's? There are many arguments as to what was the main reason for the parliamentary reform during the nineteenth and early twentieth century. There is the one argument of that it was the fear and the actual popular pressure which pushed the reform acts through. But however it can also be argued that reform was inevitable and that it was pushed through for party advantage. In this essay I will be dealing with these arguments and coming to a conclusion. The First Reform Act or the Great Reform Act as it is also known opened the door of reform and never shut. The First Reform Act was a like a tug of war battle between the two parties as each held a case as to why they wanted or not wanted the reform. The Tories were naturally against the idea but however the shocking thing was that the equally aristocratic Whigs wanted the reform. There were many problems to the system and social changes also during that time which warranted the reason for the act. The old system was riddled with corruption and rotten boroughs. This of course constantly favoured the rich who would bribe themselves back into power. Furthermore the rotten borough provided irregular representation especially of the major cities such as Manchester, Birmingham and Leeds. This allowed a lot of power to be held by the landed gentry. However revisionists1 have opened up a new debate by stating that actually the un reformed system and Old Corruption was in fact quite representative and responsive and that despite the high number of non voters, local people could still express their views and that the local elite had to work hard to keep control of their power. ...read more.

It is also said that the Whigs who were also equally aristocratic only fought so vigorously to bring in the Reform Act was because they had been out of political power for so long that they had to reform the borough as the Tories had such a stranglehold on the pocket boroughs. So therefore when there was a collapse of the Tory part, when the it split three ways with the Canningites, the Ultras and Wellington the Whigs so a chance to exploit it get some advantage over their rivals. But however there is the age old theory of the Whigs which was that they wanted reform in order to preserve. Overall I feel that it was the public pressure and hostility which scared the elites into forcing the Reform Act through. Furthermore the call for the Second reform Act after the first only enfranchised the majority of the middle class men with the �10 householder franchise. This still excluded the working class who still did not fit into the voting regulations. The new regulations also excluded miners and agricultural workers who lived in the counties. Chartism was the first sign of reform after 1832. This was created after the disappointment of the First Reform Act so after the Peoples Charter was published, the working class movement of Chartism grew and posed a threat until 1948. During its time Parliament rejected Chartist ideas on three occasions. The movement finally lost momentum due to the infamous Kennington Fiasco this is when the physical force and the moral force had an argument over which tactics should be used this led the movement to jus wither away. There are many political and public reasons as to why the need for reform sparks back into life. ...read more.

Despite there still being problems to the current system which still didn't enfranchise every single man. The radical suffragette movement led by Christabel Pankhurst created a national hype amongst the people for women to get the vote. The government also were slowly swaying towards this motion after Kirenski in Russia gave middle class women the vote in order to prevent revolution in October. The spread of bolshevism along with the fear of the Suffragettes persuaded many politicians to back them but however once the war kicked in they became hugely patriotic and the Suffragists had to revive the movement after the war. However the new bill excluded women under 30 because of the fear that they will vote Labour. In 1918 the bill finally went through albeit it only enfranchised a small portion of women it was landmark success for The Suffragists. It is said though however if the war did not take place that the women may have gained the vote as early as 1815. In conclusion I feel that each of the reform acts had a mixture of public pressure and party advantage but however I feel that it were the lingering fear and the constant 'looking over the shoulders' feeling that drove the politicians to the eventual reform. It is no disputing though that the acts did create some sort of advantage of the party who passed it. 1 Frank O' Gorman (1989) Voters, Patrons and Parties: the Unreformed Electorate of Hanoverian England, 1734-1832. Oxford University Press 2 Royle, E. Modern Britain: a Social History 1750-1997, Arnold. (1997) 3 Hamburger, J. James Mill and the Art of Revolution, Greenwood Press, 1963 ?? ?? ?? ?? Tahmid Akthar A2 History Lecturer: P Holborrow ...read more.