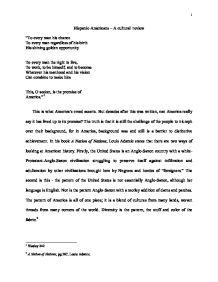 Hispanic-Americans - A cultural review "To every man his chance To every man regardless of his birth His shining golden opportunity To every man the right to live, To work, to be himself, and to become Whatever his manhood and his vision Can combine to make him This, O seeker, is the promise of America."1 This is what America's creed asserts. But decades after this was written, can America really say it has lived up to its promise? The truth is that it is still the challenge of the people to triumph over their background, for in America, background was and still is a barrier to distinctive achievement. In his book A Nation of Nations, Louis Adamic states that there are two ways of looking at American history. Firstly, the United States is an Anglo-Saxon country with a white-Protestant-Anglo-Saxon civilization struggling to preserve itself against infiltration and adulteration by other civilizations brought here by Negroes and hordes of "foreigners." The second is this - the pattern of the United States is not essentially Anglo-Saxon, although her language is English. Nor is the pattern Anglo-Saxon with a motley addition of darns and patches. ...read more.

During Spain's colonial period, which lasted from the 1500's to the 1800's, Spanish missionaries and landowners spread their language and religion throughout the areas they colonized. As a result, nearly all Hispanic Americans can speak Spanish and a large number of them are Roman Catholics. The Spanish dialect common to most Hispanics is standard Latin American Spanish. It is sometimes called 'Highland' Spanish since it is generally spoken in the mountainous areas of Latin America. The Spanish language provides forms of formal and informal addresses such as different uses of usted and tu for the pronoun you, polite and formal commands, and the use of titles of respect such as Don or Dona before a person's first name. Hispanics tend towards formality in their treatment of one another. A firm handshake is a common practice between people as greeting and for leave taking. A hug and a light kiss on both cheeks are also common greeting practices. In informal settings, conversations between Hispanics are usually loud, fast and adorned with animated gestures and body languages to better convey points. Hispanics usually give importance to, and place great value on looks and appearances as a sense of honor, dignity and pride. ...read more.

Hispanic Americans have made a difference in the history of the United States. They leave a proud heritage for future Hispanic leaders of the 21st century to emulate. Hispanics in the United States share many of the traditional values claimed by most Americans. They place high values on their families and on success through hard work. They are also proud of their Latin American heritage, as exemplified by Gloria Estefan in her song 'Get on Your Feet': Get on your feet Get up and make it happen Get on your feet Stand up and take some action Get on your feet Don't stop before it's over Get on your feet And take this weight off your shoulder.5 Many Hispanic Americans feel that they should not lose contact with their culture and language. Instead, they choose to be bilingual and bicultural. All they ask is that their culture be accepted as being part of the American culture and that they be given a fair chance to reach their full potential like the rest of the population: a chance to live the American Dream. 1 Wesley 242 2 A Nation of Nations, pg 267, Louis Adamic. 3 www.education-world.com 4 Gomez 75 5 www.lyrics.com/estefan 1 ...read more.