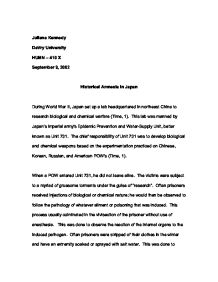 Juliana Kennedy DeVry University HUMN - 410 X September 9, 2002 Historical Amnesia in Japan During World War II, Japan set up a lab headquartered in northeast China to research biological and chemical warfare (Time, 1). This lab was manned by Japan's imperial army's Epidemic Prevention and Water-Supply Unit, better known as Unit 731. The chief responsibility of Unit 731 was to develop biological and chemical weapons based on the experimentation practiced on Chinese, Korean, Russian, and American POW's (Time, 1). When a POW entered Unit 731, he did not leave alive. The victims were subject to a myriad of gruesome torments under the guise of "research". Often prisoners received injections of biological or chemical nature; he would then be observed to follow the pathology of whatever ailment or poisoning that was induced. ...read more.

When the prisoner's extremity became rigid or gangrene it was summarily lopped off. This sometimes continued until the prisoner was nothing more than a torso with a head. If the trauma of losing his limbs without anesthesia did not kill him the next round of experiments certainly would. The Japanese experimented with electricity, diseases, chemicals, endurance to heat, cold and hunger (Japanese Times, 3). Unfortunately, the list keeps going. In an effort to cover up this "research", the Japanese bombed the facility and ordered that the 150 lingering "maruta" killed at the end of World War II. The Japanese used the euphemism "maruta" or "log " when referring to a prisoner (U.S. News, 1). ...read more.

Historical amnesia in Japan has also been evidenced by the enduring silence of surviving members of Unit 731 (Time, 2). A small number of members have come forward, describing what took place in the lab. However, the explanations always came with justification, "it was ordered" (Japan Times, 5) Japan's insincerity of confronting its past certainly warrants criticism. Their unrepentant mind-set definitely plays a part in the historical amnesia of Japan. The danger her is that it can happen again. If nations are simply allowed to whitewash their histories, they will never learn from their past. It is important to acknowledge your history. It may be overly optimistic to assume that recognition of past indiscretions will prevent repetition in the future, but the repetition despite recognition is better than repetition due to denial. ...read more.