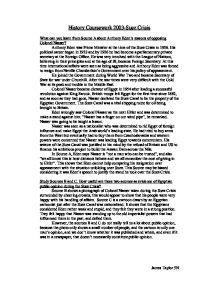 History Coursework 2003-Suez Crisis - What can you learn from Source A about Anthony Eden's reasons of opposing Colonel Nasser?

History Coursework 2003-Suez Crisis What can you learn from Source A about Anthony Eden's reasons of opposing Colonel Nasser? Anthony Eden was Prime Minister at the time of the Suez Crisis in 1956. His political career began in 1923 and by 1926 he had become a parliamentary private secretary at the Foreign Office. He was very involved with the League of Nations, believing in their principles and at the age of 38, became Foreign Secretary. At this time international affairs were seen as being aggressive and Anthony Eden was forced to resign from Neville Chamberlain's Government over his policy of appeasement. He joined the Government during World War Two and became Secretary of State for war under Churchill. After the war times were very difficult with the Cold War at its peak and trouble in the Middle East. Colonel Nasser became dictator of Egypt in 1954 after leading a successful revolution against King Farouk. British troops left Egypt for the first time since 1882, and as soon as they had gone, Nasser declared the Suez Canal to be the property of the Egyptian Government. The Suez Canal was a vital shipping route for oil being brought to Britain. Eden wrongly saw Colonel Nasser as the next Hitler and was determined to make a stand against him. ...read more.

It does not say where this photo was from. I would say that this source is not too reliable. Source F is another extract from the Daily Mirror, this time, a letter from a reader. Again, this source is not entirely reliable as it is only one person's view. This may well represent a number of people who would have written along the same lines, but it is still not entirely clear just from the sources given that the majority of public opinion was against Eden's decision to take military action. Maybe a public opinion poll would have shown us this information better. Study Sources G and H. Does Source G support Selwyn Lloyd's statement (source H) about Britain's motives for military action against Egypt? Source G is an extract from a letter written by Anthony Eden to the President of the United States regarding Suez. In this he states his primary concern is to free the Suez Canal from Egypt's control. His secondary purpose is to remove Nasser from power and replace him with a regime more favourable to the western powers. Source H is from a book written by Selwyn Lloyd, the Foreign Secretary at the time of the Suez crisis. In his book, he sees the objectives as, firstly, to prevent a war breaking out in the Middle East. ...read more.

Nasser emerged from the affair with credit as he had defied the old imperial powers and so was very popular at home and among the Arab states. Israel had nothing to show for the fighting in terms of land but they had opened the Gulf of Aqaba to their shipping and had shown Egypt that they were a power to be reckoned with. The US had shown themselves to be firm in their handling of the Western allies and this went down well in the poor countries. Russia had come to the same conclusion, and only Britain and France had nothing to be pleased about. They had been made to look foolish and humiliated by international opinion. Rarely had a British government encountered such a storm of hostility. Whilst I agree that Britain was made to look foolish, to have done nothing and allowed Nasser to keep control of the Suez Canal without challenging him was not an option, as they would have then looked weak. As Britain had no troops in the region, we could not have allowed Nasser to have the canal under his control as he could have held us to ransom and would feel that he had won. At least even though we may have been humiliated, it did stop Nasser from thinking that he could do as he wished without being challenged. James Taylor 5N ...read more.