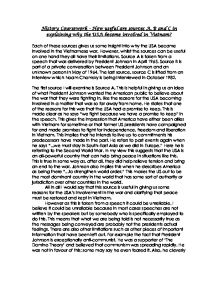 History Coursework - How useful are sources A, B and C in explaining why the USA become involved in Vietnam?

History Coursework - How useful are sources A, B and C in explaining why the USA become involved in Vietnam? Each of these sources gives us some insight into why the USA became involved in the Vietnamese war. However, whilst the sources can be useful on one hand they all have their limitations. Source A is taken from a speech that was delivered by President Johnson in April 1965. Source B is part of a private conversation between President Johnson and an unknown person in May of 1964. The last source, source C is lifted from an interview which Noam Chomsky is being interviewed in October 1982. The first source I will examine is Source A. This is helpful in giving us an idea of what President Johnson wanted the American public to believe about the war that they were fighting in, like the reasons for the USA becoming involved in a matter that was so far away from home. He states that one of the reasons for this was that the USA had a promise to keep. This is made clear as he says "we fight because we have a promise to keep" in the speech. ...read more.

What makes this source more reliable than the others is that it is a private conversation. This indicates that Johnson never intended for what he was saying to be leaked to the media or the public, so what he is saying is surely true as there'd be no need for him to lie. He also sounds informal in the way he is speaking, using colloquial language, for example the word 'damn' is used in one sentence. On the other hand this source has it's limitations as well. He states that he thinks it is not possible to fight the war in Vietnam as it is so far. This is untrue; he knows they can fight the war as he has sent thousands of troops to Vietnam along with US marines and chemical and other weapons. In a way this makes the source unreliable. Source C, the final source, is the only one of the three sources that is not spoken or delivered by President Johnson. It is taken from Noam Chomsky being interviewed in October 1982. Within in this source Chomsky puts forward what he believes are the real reasons for America becoming involved in Vietnam in the first place. ...read more.

Source B displays President Johnson's personal views about the situation in hand. This helps us clarify two things; one - how the President personally felt about what was happening in Vietnam, and two - that President Johnson was either lying in his speech of April 1965, or he drastically changed his views about Vietnam between the time of his speech and the time of the private conversation. Source C gives us unofficial reasons for America's involvement; this is unlikely to be biased about the reasons as he was not involved in the war, meaning he has no motive for lying about them. This makes the source quite reliable, in some ways more so than the other two. Although, Source C does miss out some vital details and doesn't mention a word about Communism, which is the main reason America became involved, not one of the sources mention anything about the policy of containment or the Truman doctrine, which makes them less useful because no opinions about these policies are shown. Overall, I would say theses sources give us some insight into why the USA became involved with Vietnam, however this insight is limited. We are not given the whole story or full reasoning behind the USA's involvement. In some ways Historians would find these sources useful but not explicit enough. ...read more.