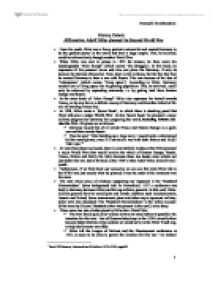 History Debate Affirmative: Adolf Hitler planned the Second World War * From his youth, Hitler was a fierce, patriotic nationalist and wanted Germany to be the greatest power in the world and have a huge empire. This, he believed, could be achieved only through another World War. * When Hitler was sent to prison in 1923 for treason, he then wrote his autobiography 'Mein Kampf' (which means 'My Struggle'). In this book, he expresses all his personal views and also war plans for Germany, if only he became the German Chancellor. Here, there is full evidence for the fact that first he wanted Germany to have a war with Russia. This was because of his idea of 'Lebensraum' (which means 'living space'). According to Hitler, Germany needed lots of living space for its growing population. This, he believed, could only be achieved by expanding eastwards, i.e. by getting land from Eastern Europe and Russia. * In the same book of 'Mein Kampf' Hitler also expresses his hatred towards France, as he saw her as a definite enemy of Germany and therefore talked of his aim of invading France also. ...read more.

The 'Hossbach Memorandum' is the written account of the event by Colonel Hossbach (who was present in the conf.) in his diary. * There were also lots of other plans by Hitler for a World War: * The Nazi family policy for women to have as many babies as possible: the intention for this was - lots of German baby boys in the 1930's would either become future German army soldiers or would serve in the Hitler Youth org. to help the German war effort. * Hitler left the League of Nations and the Disarmament conference in 1933, as soon as he came to power: the intention for this was - he wanted full rearmament of Germany by the end the decade. In the same year, he told Hermann Goring and other top generals that he wanted them to create the biggest German military ever in history. * An alliance with Japan and Italy made it clear that Hitler's policies were based on expansionism, since Japan particularly was a militaristic regime that had aggressive and expansionist foreign policies. ...read more.

'Blitzkrieg' is the warfare technique used by Hitler to use vast numbers of tanks on land and aircrafts in the air. This was planned way back in the early 1930's where Hitler started rebuilding enormous numbers of tanks and aircrafts, as soon as he came to power in Germany. Finally, I conclude by siding with Winston Churchill's orthodox view that 'Adolf Hitler planned the Second World War' as evidences for it can be seen in books written by Hitler such as 'Mein Kampf' and the 'Secret Book' (both written in the 1920's), the Hossbach Memorandum and other planned actions explained above. I also believe that the revisionist view of historian A.J.P. Taylor is not correct, as Mr. Taylor's intention is not to be analytical but to create controversy in History by confusing the readers and also to get name and fame and to earn money through his provocative history books!2 1 David Williamson, International Relations 1919-1939. page101 2 For more information on this topic or for more historiography refer the booklet, 'Interpreting the origins of the Second World War' taken from a book written by Ted Townley and given to students by Mr. Neighbor. ?? ?? ?? ?? Ponmuhil Ravichandran 1 ...read more.