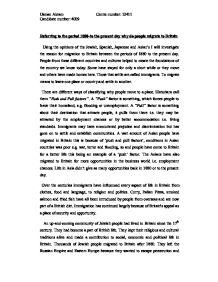 history essay 1880 to the present day

Referring to the period 1880-to the present day why do people migrate to Britain Using the opinions of the Jewish, Spanish, Japanese and Asian's I will investigate the reason for migration to Britain between the periods of 1880 to the present day. People from these different countries and cultures helped to create the foundations of the country we know today. Some have stayed for only a short while or they move and others have made homes here. Those that settle are called immigrants. To migrate means to leave one place or country and settle in another. There are different ways of classifying why people move to a place. Historians call them "Push and Pull factors". A "Push" factor is something, which forces people to leave their homeland, e.g. flooding or unemployment. A "Pull" factor is something about their destination that attracts people, it pulls them there i.e. they may be attracted by the employment chances or by better accommodation i.e. living standards. Immigrants may have encountered prejudice and discrimination but has gone on to settle and establish communities. A vast amount of Asian people have migrated in Britain this is because of 'push and pull factors', conditions in Asian countries was poor e.g. war, terror and flooding, so and people have come to Britain for a better life this being an example of a 'push' factor. ...read more.

So they tried to play the Jewish card, this meant, the Russians used the Jews for political aims. An example of this is using them as 'scapegoats' by blaming them when there was political uproar. There were several reasons why migration continued after 1905. The Aliens act passed in Britain in 1905 meant that, there was support for the Act from the Jews. It eased overcrowding and competition for work. The act stated that those without money or a way of supporting themselves were not allowed into Britain. However, a number of Jewish immigrants were dropped, perhaps due to the reason that they failed to complete paperwork The circumstances of the next major wave of Jewish migrants to leave Europe for England in the 1930s were very different. The Jews of Germany and Austria were educated and important members of society. They mixed freely with their neighbours, many had fought as soldiers in WW1, and they were generally successful and well respected. The Nazi party's rise to power, and Adolph Hitler's appointment as German Chancellor in 1933, had disastrous effects for Jews in Germany. Their rights were restricted; they were subjected to humiliation and brutality, and were increasingly isolated from normal community life. This was known as fascism. To obtain a British visa you needed a job or a sponsor in Britain. Desperate advertisements appeared in the Jewish Chronicle and other newspapers in Britain appealing for work. ...read more.

Small numbers of professionals, mainly doctors, businessmen or lawyers, had established themselves in Britain from the mid-19th century onwards. Britain's post-war economic boom which lasted until the 1970s many jobs were available. Migrants from India, Pakistan and Bangladesh increased. Some of the immigrants had professional qualifications. Many were doctors yet the majority of those who migrated were mostly unskilled. The majority of migrants from South Asia were from the north of the sub-continent: Gujarat and Punjab in India, Mirpur in Pakistan, and Sylhet in Bangladesh. Released soldiers mostly from Punjab and Gujarat arrived in Britain from the 1960s famously, were often cooks that worked on the ships. Many of them went on to work in the Indian restaurants which are very popular till today. I have discussed various reasons for Jewish, Spanish, Japanese and Asian people to immigrate to Britain. I spoke about the change over time in the Jewish settlement. Before 1905 the reason for their move was persecution and discrimination but later it was mainly economic reasons. Different groups migrate for different reasons. The Spanish moved to escape war; however the Japanese were 'pulled' because they wanted to invest in the ship building trade. Mainly all groups share 'push' and 'pull' factors. This was because mostly all groups were 'pulled' because of the attraction and opportunity in Britain. Most groups except for the Japanese were pushed as their country did not give them their full rights. 1724 words (1) www.wikipedia.org ?? ?? ?? ?? Usman Akram Centre number: 13411 Candidate number: 4009 ...read more.