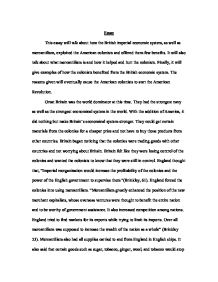 Essay This essay will talk about how the British imperial economic system, as well as mercantilism, exploited the American colonists and offered them few benefits. It will also talk about what mercantilism is and how it helped and hurt the colonists. Finally, it will give examples of how the colonists benefited from the British economic system. The reasons given will eventually cause the American colonists to start the American Revolution. Great Britain was the world dominator at this time. They had the strongest navy as well as the strongest economical system in the world. With the addition of America, it did nothing but make Britain's economical system stronger. ...read more.

Over all mercantilism was supposed to increase the wealth of the nation as a whole" (Brinkley 23). Mercantilism also had all supplies carried to and from England in English ships. It also said that certain goods such as sugar, tobacco, ginger, wool, and tobacco would stop through English ports. These examples helped and hurt the colonies. It helped them because they could ship the products they made to England and get money in return. It hurt the colonies because England no longer bought wheat, flour, fish, and other goods from the colonies. Therefore, the colonies had to find other countries that would buy their products. Americans began building more ships in order to send more supplies over to countries like Spain, France, and Denmark. ...read more.

England said the only way the colonies could export goods was through English ships. Another law said that, all imported goods coming to America from Europe had to stop at England to get taxed. Finally, England over saw all ships that left the colonies, so that they could not trade with foreign countries (Brinkley, 61). These laws hurt all business relation with other countries and benefited England. These laws and other laws that were still to come in the future gave the colonies all the reason to revolt against England. Even though the English put strict laws and taxes on the colonies, they still had a great economical system, and had some benefits come out, from the harsh laws. Through these examples, you will see that the colonies were being held down by the English and had great evidence to revolt and start their own country. ...read more.