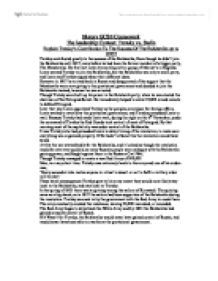 History GCSE Coursework The leadership Contest: Trotsky vs. Stalin Explain Trotsky's Contribution To The Success Of The Bolsheviks up to 1923? Trotsky contributed greatly to the success of the Bolsheviks, Even though he didn't join the Bolsheviks until 1917, were before he had been the former member of a bigger party, The Mensheviks. He first met Lenin by working with a group of Marxist's in England. Lenin wanted Trotsky to join the Bolsheviks, but the Bolsheviks was only a small party, and Lenin and Trotsky argued about their different ideas. However in 1917 he arrived back in Russia and disapproved of the support that the Mensheviks were now giving to the provisional government and decided to join the Bolsheviks instead, however he was arrested. ...read more.

Lenin wanted to overthrow the provisional government, and Trotsky persuaded Lenin to wait. Because Trotsky had made Lenin wait, during the night on the 6th November, under the command of Trotsky the Red Guards took control of most of Petrograd. By that morning most of the capital city was under control of the Bolsheviks. It was Trotsky who had persuaded Lenin to delay timing of the revolution, to make sure everything was organized properly. If He hadn't of done this the revolution would have failed. At first the war started badly for the Bolsheviks, and it looked as though the revolution would be over very quickly, as many Russian people were unhappy with the Bolsheviks gaining power, and fought against them in the Russian Civil War. ...read more.

In the spring of 1921 there was a uprising among the sailors of Kronstadt. The uprising came as a big shock, as in 1917 the sailors had been supporters of the Bolsheviks during the revolution. Trotsky was sent in by the government with the Red Army to crush them. The army eventually crushed the resistance, leaving 20,000 men dead, or wounded. The Red Army began to drive back the White Army and by 1921 the Bolsheviks had gained complete control of Russia. If It Wasn't for Trotsky, the Bolsheviks would never have gained control of Russia, and would never have been able to overthrow the provisional government. ?? ?? ?? ?? ...read more.